After the quakes: Are Japan's nuclear plants safe? 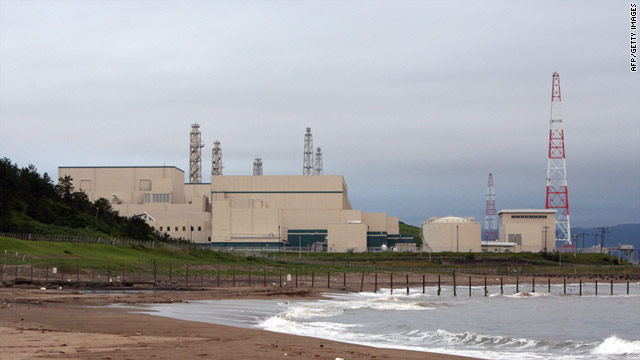 The plants were all safely shut down, authorities said, though residents near one of the facilities on Japan's east coast have been evacuated as a precautionary measure because one of its reactors cannot cool down.

How serious is this?

The plant's operators have several hours to pump emergency cooling water to the overheating reactor, according to Malcolm Grimston, a nuclear energy expert from Britain's Chatham House think-tank. "They just need to keep water flowing over the core at this stage. There's nothing cleverer to it than that," he said.

"If this cooling process fails and some of the fuel in the reactor starts to melt, then that would write off the reactor as a commercial concern -- and that is a huge consideration as they are very expensive. But even at this stage you wouldn't get much in the way of airborne releases of radioactive material."

But if the fuel has time to melt to the bottom of the reactor, then there is the possibility of it getting into water supplies, though this scenario is much further down the line, he said.

Grimston cited the example of a similar cooling malfunction at the Three Mile Island nuclear plant in the United States in 1979, when part of a reactor core melted. The incident caused no injuries or significant releases of hazardous material.

The fact the plant reactors had been shut down and the generation of energy -- known as the fission process -- halted, did much to avoid the lethal radioactive fallout witnessed during the Chernobyl disaster in 1986. This occurred when scientists at the former Soviet plant in the Ukraine failed to shut down an overheating reactor during an experiment, leading to two devastating explosions.

How vulnerable are nuclear plants to natural disasters?

Modern nuclear plants -- especially the Japanese designs -- are hugely expensive to build because of the number of in-built safety measures, experts say. According to Grimston, the Chernobyl plant -- by far the most significant accident at a nuclear facility -- differed from accepted standards in that its four reactors were not housed in a reinforced concrete shell.

Its reactor design was also considered unstable, unlike its western counterparts which shut down very easily. "This is the point the Japanese authorities are trying to make," said Grimston. "The reactors in their plants shut down as they are designed to do.

The reactors in their plants shut down as they are designed to do.
--Nuclear expert Malcolm Grimston
RELATED TOPICS

"Even at Three Mile Island the fission process was successfully stopped as soon as the incident started. This gave them many hours to decide on a course of action which safeguarded people."

The core in the very middle of a modern nuclear power station is typically encased in a thick concrete and steel shell, mounted on a type of spring -- particularly in earthquake zones.

"They absorb much of the impact of the ground movement," added Grimston. "So breaching that is pretty much impossible to imagine.

"But the circuit which carries the water that keeps the reactor core cool is the potential vulnerable point. If this cracks -- perfectly feasible in an earthquake situation -- then it loses water and doesn't protect the core it the way it is meant to."

What happens next in these circumstances?

This is when the next safety stage begins -- pumping emergency cooling water into the core. This appears to be what is happening at the Fukushima Daiichi power plant in Japan.

According to Grimston, poor instrumentation at Three Mile Island led plant officials to switch off the circuit which would have cooled the reactor core. As a result the core was left uncovered and 30-40% of the core melted.

Do nuclear plants have failsafe systems?

Yes. They are designed with an inter-connected system of fail-safes that ensure there are multiple ways of counteracting a malfunction.

According to the World Nuclear Association, all modern nuclear plants in the western world operate using a "defense-in-depth" approach. This includes:

- Provision to confine the effects of severe fuel damage to the plant itself.