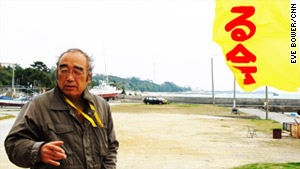 (CNN) -- Every morning at 7:30, Hiroshi Ashitomi trudges up sand-dusted steps, pries open a metal folding chair and joins a handful of his fellow retirees under a plastic tent, facing seaward. They are staging a protest.

Their sit-ins are in opposition to a perceived threat that many of his neighbors also fear: the planned expansion of a U.S. military base on Okinawa's east-facing Henoko Bay.

Last week, however, the routines of both Ashitomi and the U.S. military were upset. And even though the reason for that disruption -- a devastating earthquake and subsequent tsunami -- demonstrated the advantage of having U.S. bases, Ashitomi and others say they will not alter their efforts to get the U.S. military off the island.

In the wake of the earthquake, the U.S. military is sending humanitarian aid and technical assistance to the hardest-hit areas of Japan. Many of these efforts are being launched from bases on Okinawa Island, where the United States maintains a permanent military presence under a treaty the two countries signed after World War II.

Staging areas in Okinawa allowed U.S. assistance to reach the affected areas faster than aid from many other countries. Perhaps more than at any time in recent memory, the U.S. military has made a compelling case for its presence on Okinawa.

But to Ashitomi, who said he views U.S. troops as de facto occupiers, the benefits are outweighed.

He is not alone. Susumu Inamine, mayor of the city of Nago on Okinawa, pointed out Saturday that he was elected on a platform of "no new construction of U.S. facilities" on the island. He also recited a litany of statistics that many in Okinawa have committed to memory: Seventy-five percent of all U.S. bases in Japan are on Okinawa, an island that makes up less than 1% of Japan's territory, and 20% of the land on the island is taken by U.S. bases.

Inamine said his constituents feel that the Japanese central government requires a disproportionate "burden" of Okinawans, relative to residents of other parts of Japan. He wants some of the U.S. presence on his island to be relocated to another Japanese island.

Still, not everyone in Okinawa is against the influence of the United States, which provides economic and strategic benefits.

In statistics from the Marines at Kadena Air Base, U.S. forces spend an annual $1.9 billion in the local economy, constituting as much as 10% of Okinawa's Gross Prefectural Product. And according to Article 9 of Japan's Constitution, "land, sea, and air forces, as well as other war potential, will never be maintained," meaning that the U.S. military presence represents Japan's strongest line of defense in the event of an attack.

But Ashitomi said he would not be deterred.

"Once the tsunami warnings are lifted, I will be back every day until Mr. Obama cancels the current plans for the base expansion," he said.

Asked why he, a Japanese citizen, pinned his hopes on the U.S. president, he said, "The Japanese government will listen to whatever the U.S. government tells them. The government of Japan doesn't have its own policy. It's a pitiful government."