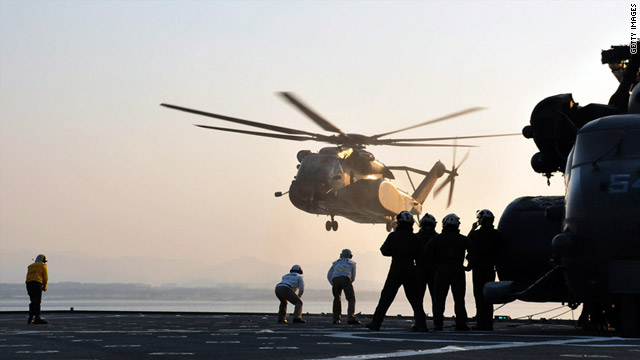 Helicopters land on the USS Tortuga in the Sea of Japan on Saturday as the U.S. military prepares to deliver aid.
STORY HIGHLIGHTS

(CNN) -- The 8.9-magnitude earthquake and coastline-devouring tsunami that hit Japan has led 49 countries, the European Union and even the International Atomic Energy Agency to band together and offer relief to the devastated island nation.

With Japan's death toll at 686 people, the international relief effort has been spurred by the stark, globally televised videos of homes and offices rattled to near collapse and entire waterfront communities being washed away by a rising ocean.

On Sunday, the nuclear-powered aircraft carrier USS Ronald Reagan arrived off the coast of Honshu to support Japanese forces in disaster relief operations, the U.S. Department of Defense said in a statement.

Also Sunday, the Chinese government sent a 15-member team to assist in the search for survivors, Xinhua News Agency reported. The team brought with them four tons of equipment and material for the search as well to provide power and telecommunications to areas that have temporarily lost those services because of the quake.

Worrying for loved ones in Japan

In addressing one of the bigger potential threats, the international atomic agency's Incident and Emergency Centre has offered technical assistance to Japan in the wake of an explosion at the Fukushima Daiichi nuclear plant. An evacuation order for a 20-kilometer (12.4-mile) radius around the plant is affecting tens of thousands of people.

On Saturday, the United Kingdom said it was sending a team of 59 fire service search-and-rescue specialists, two rescue dogs and a medical support team, according to the Foreign and Commonwealth Office.

With a scheduled arrival on Sunday, the crew will immediately join the international search for survivors in shattered and inundated communities, the British office said.

The teams will take up to 11 tonnes of rescue equipment, including heavy lifting and cutting equipment to extract people trapped in debris, the government said.

South Korea is sending two rescue dogs, two handlers and three assistants to carry out what are expected to be dramatic searches of people inside collapsed structures. The rescue teams were scheduled to arrive Saturday, Japan's Ministry of Foreign Affairs said in a written statement.

In China, Premier Wen Jiabao, who expressed "deep sympathy" to the Japanese government and people, made a formal offer of assistance. Members of the country's international rescue team were ready to depart for Japan if needed, Chen Jianmin, director of the China Earthquake Administration, told the government's Xinhua News Agency.

The United States is providing as many 11 warships, with their helicopters, to assist Japanese authorities in rescue and recovery missions.

The U.S. Agency for International Development was dispatching two urban search-and-rescue teams, one from Fairfax County, Virginia, and the second from Los Angeles County -- totaling 150 people and 12 canines trained to find survivors. They are scheduled to arrive Monday morning in Japan.