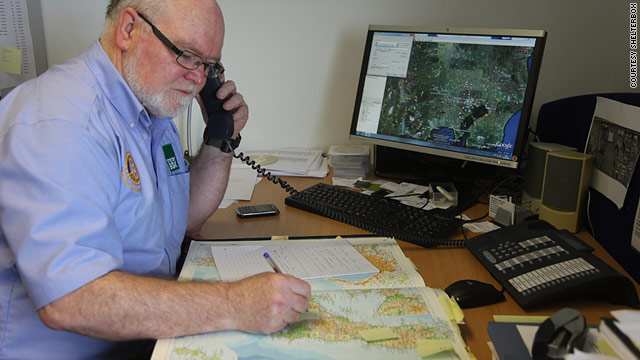 (CNN) -- After a deadly earthquake and tsunami struck Japan last Friday, response team members from ShelterBox were on the ground within 24 hours.

The organization, founded by 2008 CNN Hero Tom Henderson, provides emergency shelter and lifesaving supplies to families affected by disasters. These essentials come in a large, green box that shares the organization's name.

With an initial 600 ShelterBoxes en route to thousands of survivors in northern Japan, Henderson's group is doing whatever it can to help a country in crisis.

Henderson spoke with CNN's Allie Torgan about nuclear fears and his group's ongoing efforts in Japan.

CNN: How did you mobilize your team into action when you heard about the earthquake?

Tom Henderson: Within minutes, we were moving. We look at our resources, what we've got available, where our teams are around the world and how quickly we can get people on the ground. We're fortunate that we've got boxes positioned in different parts of the world and we've got our response team members around the world. Within an hour, we were looking at our people going, "Go jump on an airplane, group together in Tokyo, and let's get this thing moving."

We had our first people on the ground within 24 hours. There are boxes leaving every day in different numbers. We've got people monitoring our team on the ground minute by minute.

CNN: How are fears of nuclear catastrophe affecting ground operations?

Henderson: Every disaster's unusual, this particularly so because of the nuclear problem that's unfolding. We're monitoring it hour by hour, and we've got some world experts advising us on what's happening.

We don't want to put people in harm's way. We have to take advice from the experts and, of course, there's an exclusion zone, so we're not operating in that exclusion zone. Unfortunately, that exclusion zone does encompass a lot of the most-devastated areas. But there's other work that's going on, more assessments that are being done and operational things we put in place. Of course, working with the local community, we want to find out (who are) the most needy people.

CNN: Reports are out saying that millions of households throughout Japan have no access to safe drinking water. How will ShelterBox address this and other needs?

Henderson: Clean water is becoming a problem, as will food very shortly. In every one of our boxes, we have what we call a family life straw. It's a water-cleaning device, and it will clean enough water for 10 people for 12 months. You simply pour the dirty water in. It's a mechanical device -- a filter system that has very clever silver chloride filters and iodine -- and it gives out clean water. That's included in every one of our boxes.

As a situation unfolds and the detail comes back, we coordinate with the local community and find out exactly what is useful. There's always different (items) in the boxes. The box itself is usually useful. The tent, which is now universally known as one of the best aid tents in the world, is designed to keep people warm when it's cold and cool when it's hot. And (there are) state-of-the-art blankets because it's very cold.

CNN: You and your teams have been working nonstop for the last week. What keeps you going?

Henderson: What keeps us going is very simple. It is that desperate need to help people as quickly as we can. And that's infectious in our organization. There are over a million people in our tents now in over 60 countries around the world in the most difficult conditions. We don't need any motivation -- the motivation is needy people. We rest between disasters.

For more information, visit the ShelterBox website at www.shelterbox.org.