Disaster is heavy burden to bear for Japan's elderly 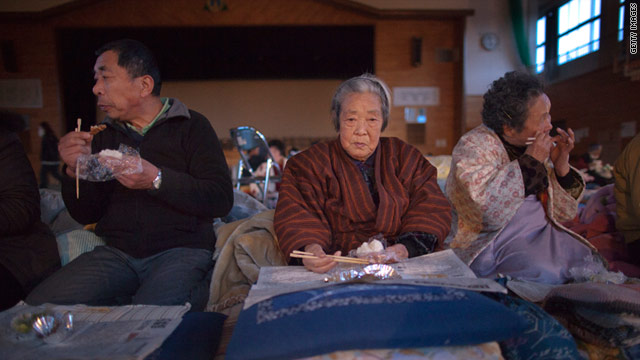 Japanese families eat dinner at a shelter on March 16, 2011 in Kesennuma, located in the northeast of Miyagi prefecture.
STORY HIGHLIGHTS

(CNN) -- Their stories have been of loss and of resilience.

Hiromitsu Shinkawa, a 60-year-old from Minamisoma, was rescued at sea two days after seeing his wife and house swept away by a tidal wave.

A 70-year-old woman in Iwate prefecture who, along with her house, was carried away by the tsunami, but managed to survive the ordeal.

and riding to safe ground.

In Japan, where nearly a quarter of the population is aged 65 and older and where women hold the world record for longest life expectancy, many of the faces of the disaster have been elderly.

The 9.0-magnitude quake that hit the northeastern coast last Friday wiped out rural villages and towns -- areas which "tend to be older because young people have left for the cities," according to Richard Jackson, head of the Global Aging Initiative at the Washington-based Center for Strategic and International Studies.

Sarah Harper, director of the Oxford Institute of Population Aging, said: "In many rural areas, there's a rural-out migration and you have communities that have high percentages of independent self-sufficient older people in their 80s and 90s."

The quake and its ensuing tsunami have killed more than 5,000, as of Thursday, and almost 10,000 still remain missing, according to the National Police Agency. Japan has mobilized the largest call-up of its Self-Defense Forces since World War II to deal with the catastrophe, which in addition to causing billions of dollars of damage, has unleashed a nuclear crisis that is still unfolding.

Richard Blewitt, CEO of HelpAge International, a global non-profit that helps disadvantaged older people, said Japan's large older population could be among the hardest hit by the disaster.

Race to save lives in Japan
RELATED TOPICS

Many older people have found it hard to cope because of vulnerabilities like mobility, he said. "The sad thing is that in a tsunami, there is really very little evacuation time," he said. "Japan had good preparedness plans and no doubt included plans for older people, but sadly this just wasn't enough."

As the emphasis shifts from rescue to relief and recovery efforts, there are specific challenges facing Japan's elderly victims in the weeks and months and even years ahead, experts said.

"When faced with disaster, older people are physically and psychologically affected in different ways than younger people," said Sarah Harper, who studies the implications of aging societies.

In emergency situations, older people are more susceptible to environmental changes, such as changes in temperature and lack of food or water. In the aftermath of the Japan disaster, below-freezing temperatures and snow have been hampering relief efforts.

A staff member of the International Federation of Red Cross and Red Crescent Societies, reporting over the weekend from Miyagi prefecture, said there is concern about the elderly, "who have been particularly hard hit and are extremely vulnerable to hypothermia."

About 440,000 people have been evacuated from Japan's stricken zone, according to the World Health Organization. More than 23,000 are still looking for shelter, the global health body said.

"For younger people, to live in a shelter for three to four weeks might not be a big deal, but for an older person it's completely different," Harper said.

In the longer run, there are psychological effects that older victims may suffer. "Loss of family, carers and community ties can leave older people without support mechanisms, and abandonment, discrimination and self-exclusion are common," said Blewitt.

"Japan is incredibly collaborative and community-based and family-based," Harper said. "I don't think intentionally older people will be neglected. But for any older person, no matter how supportive communities are, practicalities are of a different dimension if you're old and frail."

In the response and reconstruction phases, it's important to ensure that older people's needs are built into plans, Blewitt said. "Socially or physically isolated older people need to be identified and given targeted support."

While the disaster has hit many on a personal level, it could also have implications on the national psyche, according to Jackson, who said older populations like Japan's may find it harder to overcome adversity.

About 23% of Japan's population is aged 65 and over. By comparison, in the United States, the figure is just over 13%.

"Younger societies are often energized by a tragedy or challenge, but aging societies may be more likely to despair," he said.

He continued: "This is a bit speculative because we don't have any historical experience with societies as old as Japan is. But it seems to me that it's a real possibility and something that we'll probably be looking at in years ahead."

However, the ability of reinvention is deep in the wellsprings of the Japanese national spirit, he noted, citing the extraordinary redirection of the country's energy following World War II.

"If any aging society can reinvent themselves, then it's Japan."