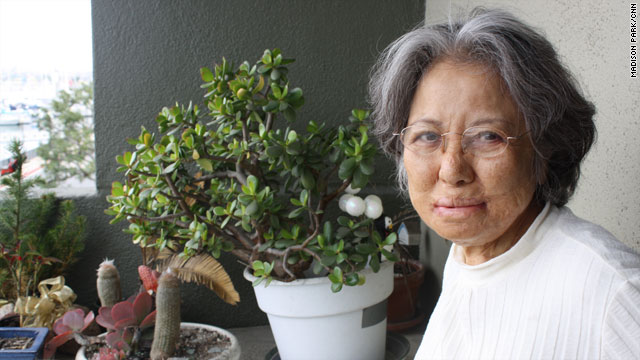 Los Angeles (CNN) -- The cities flattened by last week's earthquake look eerily similar to the decimated buildings Shigeko Sasamori saw after an atomic bomb was dropped on her hometown in 1945.

The floodwaters from the tsunami -- the waves of debris and bodies -- remind her of the rivers in Hiroshima, Japan, swamped with corpses.

And the struggle to contain radioactive emissions at the Fukushima Daiichi nuclear plant makes Sasamori, 78, wonder if the crisis there will plague a new generation in Japan.

"Radiation is the most horrible thing, and it's more horrible to me because humans make it," she said from her home near Los Angeles. "We don't have to make that."

Sasamori is a hibakusha, or heat radiation survivor -- a name given to those who lived through the atomic bombs dropped on Hiroshima and Nagasaki by the United States at the end of World War II.

For them, radiation is an invisible enemy that has haunted them, claimed their loved ones, altered their bodies and threatened their lives.

The parallels between the devastation from the 1945 atomic bombs and that of the earthquake, tsunami and nuclear crisis have reopened old scars.

Sasamori wakes up at night and watches Japanese TV coverage of the disasters from her living room. A slender woman, dignified and gray-haired, Sasamori is shaken. Her body is sleepless, and her heart feels heavy, she said.

And she waits for news, because her daughter-in-law's extended family has yet to be located in the oceanside prefecture of Iwate.

As a nervous world watches the situation at Fukushima, some hibakusha worry that more Japanese people may have to endure the ordeal of radiation exposure than they did after World War II.

"This is like déjà vu," said Dr. Ritsuko Komaki, another Japanese American who grew up in Hiroshima after the bomb fell when she was 2.

Japan's modern history has now been haunted by two major nuclear events: the atomic bombs and the struggle to contain the Fukushima Daiichi nuclear plant, which the Japanese prime minister described Friday as "very grave."

'It's always in their minds'

On August 6, 1945, Sasamori, then 13, saw an American plane flying overhead and paused from her work of clearing the streets in Hiroshima. With men serving in the military, children often had to work in public projects.

"It's such a pretty airplane," she said to her classmate.

She was standing within a mile of ground zero when the bomb fell. The blast knocked her unconscious. It singed her face and upper body, and melted the bones in her hands. Miraculously, Sasamori and her immediate family survived the impact.

Weeks after the bombing, she saw that some of her neighbors who had not been injured by the blast, were suddenly bleeding from their gums and were vomiting.

"They had purple spots, like Dalmatians' spots. Their hair was gone and they died," she said.

We were employment risks. What if you get sickly and tired? You're a liable employee. They don't want to hire you.
--Hiroshima survivor Hideko Tamura Snider

The hibakusha like Sasamori have lived in uncertainty, watching their childhood friends fall ill and wondering if their bodies were ticking time bombs for radiation-related diseases.

"I try to ignore it, but it never goes away," said Komaki, who grew up in Hiroshima after the bombing and is now chief of thoracic radiation oncology at the MD Anderson Cancer Center in Houston, Texas.

"A lot of people who are exposed to radiation in that city, it's always in their minds."

When harmful radiation penetrates the human body, it can alter the DNA, leaving mutated cells. Children are more sensitive, because they are growing rapidly and have more cell division, which can spread the cancer.

By the end of 1945 -- less than five months after the bombs fell -- about 140,000 people had died. Some babies born in subsequent months had birth defects, shrunken heads and mental disabilities.

Many hibakusha could not get married because of their disfigured appearance and fears about offspring.

"My aunt never wanted to get married because of the fear she might have an abnormal baby from the effects of radiation," Komaki said. She took tranquilizers to ease her pain, and eventually died of an overdose, according to Komaki.

Some people feared they could get infected with radiation from being close to survivors.

"We became outcasts," said Hideko Tamura Snider, who was 11 when the bomb fell in Hiroshima. "A lot of people hid that they were there. We were employment risks. What if you get sickly and tired? You're a liable employee. They don't want to hire you."

In the 1950s, the Japanese public grew more aware of the hibakusha partly because of a nuclear test on nearby Bikini Atoll that left several Japanese fisherman with radiation illness.

The incident drew attention to nuclear issues, and Japan made medical care available for the hibakusha in 1957.

At the same time, the country began harnessing nuclear power.

"That is, Japan knew that it would need more resources if it were going to transform itself into a global powerhouse. And it had no oil. It was running out of coal and there was no liquefied natural gas in the 1950s."

The government promoted nuclear energy as a positive resource under a program called Atoms for Peace.

The Japanese had "a strong sense of finding the good out of the bad," said James Orr, associate professor of East Asian Studies at Bucknell University in Lewisburg, Pennsylvania, who has researched hibakusha and Japanese history.

Even in the worst case scenario ... I think there will be an expectation they should be treated well.
--Associate professor James Orr on nuclear workers
RELATED TOPICS

By the 1960s, Japan's steel and shipbuilding industries were rebounding around the same time that its first nuclear power plants were coming online. Nuclear energy had been re-purposed and embraced. Before the quake, Japan was only third behind the U.S. and France in the number of nuclear reactors, with 54 online.

The hibakusha are divided on nuclear power.

Sasamori opposes it. "We know how dangerous it is when you're exposed to radiation. We had Hiroshima and Nagasaki and many people suffered."

Another Hiroshima survivor, Masahiro Sasaki, speaking from Kyushu, Japan, said he doesn't think people who use electricity produced by nuclear energy should call for its end.

"What we have to do is find out how to deal with safety and think about the next generation," he said. Energy is necessary, but needs to become safer so the situation at Fukushima Daiichi is never repeated, Sasaki said.

Despite the neglect the atomic bomb survivors suffered, Bucknell's Orr says such discrimination is unlikely to occur again.

"There has been prejudice against hibakusha in the past," he said. "I think Japanese society is more cosmopolitan, and it's a much more sophisticated social reality that exists today.

"Even in the worst case scenario, that workers become affected from the Fukushima plant, I think there will be an expectation they should be treated well."

For now, many of the hibakusha watch their TV sets, their pain still fresh after six decades.

"These memories and images were etched in our heart and mind," said Hiroshima survivor Hideko Tamura Snider, now 77 and living in Medford, Oregon.

"It sank into the depths of our core. There is a grief, but we went on to rebuild our lives and our country. The same will happen now in Japan."