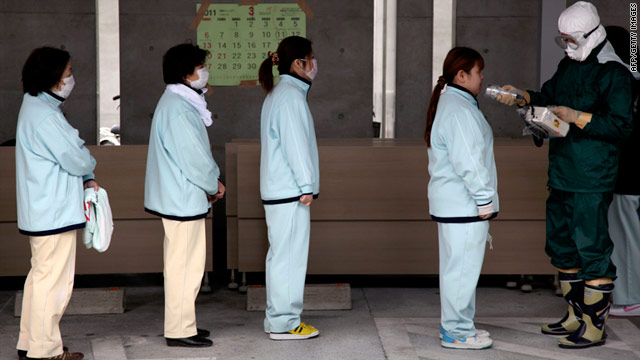 People line up for radiation screening at Koryama in Fukushima prefecture on Monday.
STORY HIGHLIGHTS

Plant operator Tokyo Electric Power Co. said that high levels of radioactive substances were found in seawater near the plant, but said that the results did not represent a threat to human health.

"There should be no immediate health impact. If this situation continues for a long period of time, some impact can occur," Chief Cabinet Secretary Yukio Edano told reporters.

The impact such radiation could have on marine life was unclear. Japanese authorities were scheduled to measure radioactivity in waters around the plant on Tuesday and Wednesday, the International Atomic Energy Agency said.

Because of the huge amount of dilution that happens in the ocean, there's not much chance of deep-water fish being tainted, said Murray McBride, a professor at Cornell University who studies soil and water contamination.

"I think the ocean can handle that a lot better than the physical environment and population centers," said Jim Walsh, an international security expert at the Massachusetts Institute of Technology and a CNN consultant. "We don't want any of this to happen, but better it go out to sea than stay in Japan."

Winds have largely blown radioactive material emitted by the plant offshore since an earthquake and tsunami crippled cooling systems at the plant March 11.

But tests have detected contamination of food grown near the plant.

The Japanese government has banned the sale of raw milk from Fukushima Prefecture, where the plant is located, and prohibited the sale of spinach from neighboring Ibaraki Prefecture after finding levels of radioactive iodine and cesium higher than government standards, the country's health ministry reported.

And officials in Fukushima halted the distribution of locally grown vegetables outside the prefecture.

On Tuesday Edano said contamination had not been detected in other agricultural products.

"The products which are being grown in these areas are being monitored and the monitoring will continue," he said.

He urged consumers to "try not to panic," noting that the government had stopped shipments of any farm products they believed could be contaminated.

Edano has stressed that officials believe the levels of radiation in food -- while above the legal standards -- do not pose any immediate health risk, saying they were mostly dangerous only if consumed repeatedly over one's lifetime.

On Monday, authorities in the village of Iitake urged residents to avoid drinking tap water that tests showed contained more than three times the maximum standard of radioactive iodine.

Edano has said farmers will be compensated for revenue lost by the restrictions.

"Primarily this is due to the nuclear reactor accident, so we assume (Tokyo Electric Power Company) will be held responsible for compensation. The government might take some supplementary action," he said.

Fukushima ranks among Japan's top producer of fruits, vegetables and rice. Ibaraki, south of Fukushima, supplies Tokyo with a significant amount of fruits and vegetables and is Japan's third-largest pork producer.

Soil contamination was a huge issue around Chernobyl, but the radiation emitted from the Fukushima Daiichi plant isn't anywhere near that level, he said.