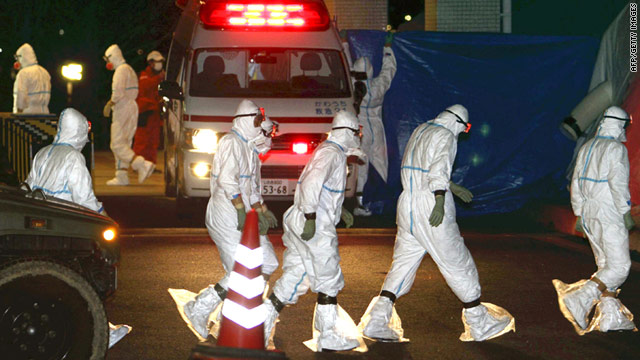 Tokyo (CNN) -- The water that three men were recently exposed to while working at the Fukushima Daiichi nuclear power plant had 10,000 times the amount of radiation typical for that location, Japan's nuclear and industrial safety agency official said Friday, adding that the high levels indicated the nuclear fuel inside the No. 3 reactor "is damaged."

Still, the incident raised further questions -- not just about the integrity of the reactor's core, which earlier was suspected to have suffered significant damage after this month's 9.0-magnitude earthquake and subsequent tsunami -- but also about the radiation control measures in place at the plant.

The workers were laying cables Thursday in the basement of the reactor's turbine building when they stepped in the water. It seeped into the ankle-height boots of two of the men, according to Tokyo Electric Power Company, which operates the plant.

Such liquid in this locale typically has been boiled and has low levels of radiation, Hidehiko Nishiyama of Japan's nuclear and industrial safety agency explained Friday.

The high radiation measure prompted a top official with Nishiyama's agency to contact authorities with the Tokyo Electric Power Company to urge that company to "improve its radiation management measures."

Experts said Thursday that the outlook for two workers hospitalized after stepping in contaminated water should be good.

Those two men, one in his 30s and a second in his 20s, were taken to Fukushima Medical University Hospital, officials said. The third was not hospitalized, because his boots were higher and covered his skin, avoiding contact, according to Tokyo Electric.

Workers have been attempting to restore power at the Fukushima plant since a tsunami following a 9.0-magnitude earthquake March 11 knocked out electricity.

The workers were hospitalized because authorities suspected beta contamination, the company said. Beta radiation can penetrate skin to the layer where new skin cells are produced and can cause skin injury. Tokyo Electric said Friday they were still waiting to confirm whether beta contamination had taken place.

The two workers will be transferred to the National Institute of Radiological Sciences in Chiba Prefecture for further observation, and will probably remain hospitalized for about four days, according to Tokyo Electric.

Most of the affected workers thus far from the plant have suffered from airborne exposure to radiation, not skin contact. Edano called the situation "unprecedented or unpredictable" and said workers have been warned to avoid such situations in the future.

The workers had been at the reactor for about 90 minutes, Tokyo Electric told reporters early Friday. They were working in water that was about 15 centimeters (5 inches) deep for about 40 to 50 minutes.

But "usually, skin contact is not something that would be very worrisome," said Dr. James Cox, a radiation oncologist at MD Anderson Cancer Center in Houston, Texas, and a CNN consultant. In fact, he said, it's less of a problem than breathing in radiation, most of the time.

"It would depend on what happened to them," Cox said. The key would be washing the skin as quickly as possible, which would reduce any potential contamination, although possibly not eliminate it entirely.

Cox said any burns from beta radiation would be unlikely -- although not impossible.

However, Dan Polanski, an expert on weapons of mass destruction, said it was unclear how long the workers were in the water, which would determine the level of radiation to which they were exposed.

Measurements of the water's surface taken after the exposure showed it was about 400 millisieverts, the company said. The air measured about 200 millisieverts. Testing on the water continues, officials said. Tokyo Electric and Japan's Nuclear and Industrial Safety Agency said Friday they did not know whether the water came from the tsunami or from water that has been pumped in to cool the reactor.

Japan's Health Ministry recently raised the maximum level of exposure for a person working to address the crisis at the nuclear plant from 100 millisieverts to 250 millisieverts per year. A person in an industrialized country is naturally exposed to 3 millisieverts a year.

If their exposure exceeds 250 millisieverts a year, workers will be prohibited from engaging in nuclear work, Edano said. "The situation differs from one case to another," he said, and labor laws also come into play when such cases are evaluated.

Decontamination will be a priority in treating the workers, said both Cox and Polanski. If radiation burns are present, they would be treated just like a regular burn, with a sterile dressing and antibiotics.

If burns are not present after a thorough washing, the workers' clothes would need to be checked for contamination, Cox said.

Tokyo Electric officials were asked why the workers did not evacuate the area amid rising radiation levels, as their dosimeters, which measure radiation exposure, are set to trigger an alarm when the level of 20 millisieverts is reached. Officials said that workers are told to leave, but ultimately it is their decision to do so.