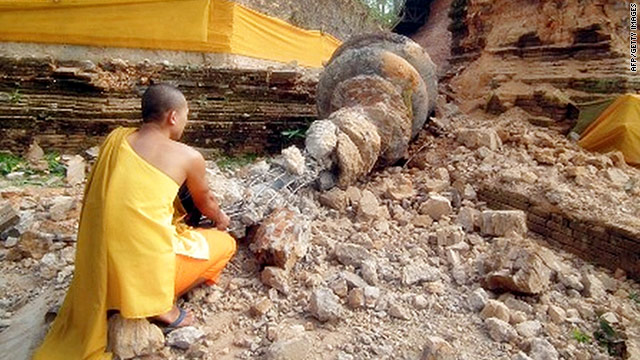 A Thai Buddhist monk inspects a fallen stupa of the Chedi Luang pagoda a day after a strong earthquake hit Myanmar.
STORY HIGHLIGHTS

(CNN) -- The death toll from a powerful earthquake that hit Myanmar has gone up to 75, state media reported Friday.

The 6.8-magnitude earthquake struck Myanmar on Thursday near its borders with China, Thailand and Laos, according to the U.S. Geological Survey.

The Geological Survey said the quake was 6 miles (10 km) deep, putting it fairly close to the surface.

A powerful cyclone in 2008 left an estimated 100,000 people dead and another one two years later left 70,000 people homeless, the United Nations said.

The quake was significantly less powerful than the one that hit Japan two weeks ago, causing a tsunami and prompting fears of a nuclear meltdown. The series of disasters in Japan has left more than 10,000 people dead.