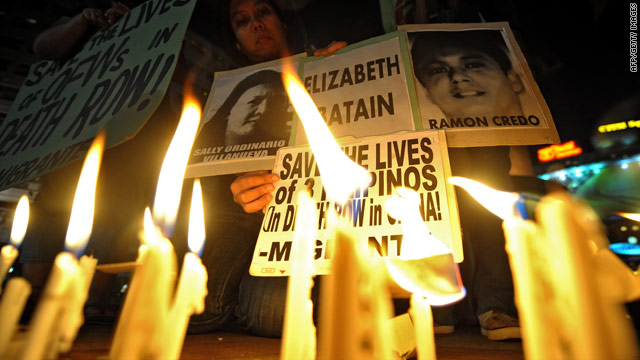 A protester lights a candle during a vigil appealing to the Chinese government to stop the execution of three Filipinos and commute their death sentences on humanitarian grounds in Quezon City, the Phlilippines, on March 24.
STORY HIGHLIGHTS

Ramon Credo, 42, and Sally Villanueva, 33 were executed in the southern city of Xiamen, while Elizabeth Batain, 38, was put to death the same day in Shenzhen, near Hong Kong. They were arrested separately in 2008, authorities said they were carrying package of at least four kilograms of heroin to China.

The case triggered a wide range of emotional responses in the Philippines, my native land, and among Filipinos overseas.

Philippine presidential spokesman Edwin Lacierda issued a statement after receiving news of the executions. Expressing sympathy to the families of the three, Lacierda said: "Their deaths are a vivid lesson in the tragic toll the drug trade takes on entire families." He said the government will act strongly to combat drug syndicates. "We are resolved to ensure that the chain of victimization, as pushers entrap and destroy lives in pursuit of their trade, will be broken," he said.

In the days before the executions were carried out, parayer vigils and special masses were organized in Manila and other cities in the hope of a "miracle" reprieve for the three convicts.

"No miracles happened," wrote Rodel Rodis, a lawyer based in San Francisco, in his posting on Facebook. Rodis opposed the executions, saying "they are human beings with families and they were just dupes of drug syndicates."

We believe these Filipinos were merely victims of trans-national drug syndicates. They were just duped into their crimes
--Jejomar Binay, Philippine Vice President
RELATED TOPICS

Ramon Tulfo, a prominent multi-media commentator in Manila, had a different view. "We have a lot of things to cry over, so let's not waste our tears on three convicted criminals who brought shame to our country," Tulfo wrote in the Philippine Daily Inquirer. "If we continue to plead for (their lives), we might give the impression that our country is a haven of drug mules. Let's allow the Chinese people to carry out their harsh antidrug trafficking law, as we would expect them to carry out ours in case Chinese (are) caught trying to smuggle drugs into our country."

Tulfo also asked the government to investigate how the three managed to smuggle illegal drugs through security checks in the Philippines, saying if anyone else was involved they "should be ferreted out and sent to prison."

The three Filipinos were originally scheduled for execution on February 20, but China agreed to postpone the executions after Philippine Vice President Jejomar Binay traveled to Beijing to plead on their behalf.

The postponement prompted speculations that it was an unprecedented response to various gestures made by the Philippine government. Manila last December decided not to send a representative to the Nobel Peace Prize ceremony in Oslo, which honored Liu Xiaobo, a Chinese political dissident.

China had been infuriated by the Nobel award and had pressured other countries not to attend the ceremony.

During his visit to Beijing in February, Vice President Binay told CNN that there was no under-the-table deal with China. "We do not condone drug trafficking and we respect China's laws," Binay said. "However, we believe these Filipinos were merely victims of trans-national drug syndicates. They were just duped into their crimes."

Philippine officials had acknowledged that the postponement was not equivalent to a reprieve or commutation of the death sentences.

In early March, Liu Jianchao, Chinese ambassador to the Philippines, told Philippine reporters in Manila that the court's decisions were final and the executions would take place sooner or later. Last week, the executions were set for March 30.

Days before the executions, Philippine officials made last-ditch efforts, asking that the three Filipinos be spared. President Benigno Aquino Jr. wrote his Chinese counterpart Hu Jintao to ask for clemency.

China maintains that drug trafficking is a serious offense and it imposes strict punishment on those convicted of the crime. Under Chinese laws, trafficking of 50 grams or more of drugs is punishable by long prison terms. Those convicted of smuggling larger amounts receive life sentences or death.

The death penalty is usually imposed by local courts and subject to review by the Supreme People's Court, which makes final judgment.

According to authorities, Credo and Ordinario were caught smuggling at least four kilograms each of heroin, while Batain was arrested with almost seven kilograms.

It may not be the last case to draw international attention. As of October 21, 2010, according to the Department of Foreign Affairs (DFA) in Manila, there are more than 70 Filipinos in China who were convicted and sentenced to death for drug trafficking.

Only six of the cases have reached the Supreme People's Court. Two were overturned, one is still under review and three were affirmed and carried out on Wednesday.

According to Filipino diplomats who interviewed them, the accused were "drug mules" recruited by trans-national drug syndicates to act as couriers. Quite often, Philippine officials say, they are promised "courier fees" ranging from a few hundred to a few thousand dollars. "This happens to many Filipinos who are desperate to get quick money or a job overseas," one of the diplomats tells me. "It's 'kapit sa patalim'--desperate people grabbing at knives."