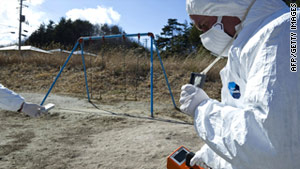 Tokyo (CNN) -- Radiation levels in a Japanese town outside a government-ordered evacuation zone have exceeded one of the criteria for evacuation, the International Atomic Energy Agency said Wednesday.

The elevated levels were found in Iitate, a town of 7,000 residents about 40 kilometers (25 miles) northwest of the earthquake- and tsunami-damaged Fukushima Daiichi nuclear power plant, the agency said. The evacuation zone covers a 20-kilometer (13-mile) radius around the plant.