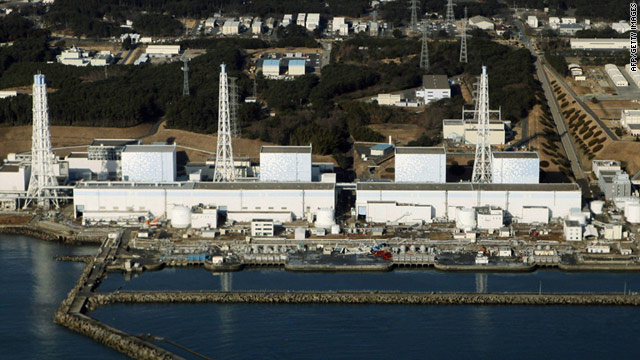 (CNN) -- Since March 11, the six reactors at the Fukushima Daiichi nuclear power plant have been in various states of disrepair after a 9.0-magnitude earthquake and subsequent tsunami struck the area.

Here is the latest on each reactor and efforts to prevent further releases of radioactive material.

The temperature in the reactor's pressure vessel had decreased slightly Wednesday after climbing above 400 degrees Celsius last week, according to the Japan Atomic Industrial Forum trade group. But pressure inside the vessel was gradually increasing.

Plant owner Tokyo Electric Power Co. said radioactive water was found in the unit's turbine building Monday. That's a sign that radioactive material may have leaked outside the containment vessel, the Forum says. Workers were pumping the contaminated water into a tank Tuesday.

A hydrogen explosion -- an indicator of core damage -- blew the roof and upper walls off the building housing the reactor on March 12.

Radioactivity levels that posed an immediate health hazard were detected in a maintenance tunnel leading to the unit's turbine building. That has sparked fresh concerns about the possibility of radiation leaking into the ocean. Hidehiko Nishiyama of the Nuclear and Industrial Safety Agency said workers were using sandbags and concrete panels to keep the water inside the tunnel, which is located about 55 meters (180 feet) from the shore. The agency said there is no evidence of overflow yet.

Tokyo Electric said radioactive water was found in the unit's turbine building Monday. Efforts had begun Wednesday to clear space to store the contaminated water, but work had not yet started to remove it from the floor, Tokyo Electric said. The process of draining the water could take four or five days to complete, the company said.

Japanese Chief Cabinet Secretary Yukio Edano said Monday that he has received a report that the No. 2 unit's containment vessel "is damaged and water is leaking."

Workers were pumping freshwater Tuesday into the No. 2 unit's reactor core, which the Japan Atomic Industrial Forum says has been damaged. The building housing the reactor has only been "slightly damaged," according to the Forum.

The No. 3 reactor has been of particular concern because it is the only one to use mixed-oxide fuel that contains a small percentage of plutonium, which is also a byproduct in other reactors. A small amount of plutonium was detected in soil samples on the plant grounds last week, Tokyo Electric reported Monday. Edano said Tuesday that it was "likely" the plutonium came from the plant.

Tokyo Electric said radioactive water was found in the unit's turbine building Monday. Efforts had begun Wednesday to clear space to store the contaminated water, but work had not yet started to remove it from the floor, Tokyo Electric said. The process of draining the water could take four or five days to complete, the company said.

The cooling pool where spent fuel is stored may also have been damaged, the Japan Atomic Industrial Forum reports. Workers used a concrete pump to douse the spent fuel pool with water Tuesday, Nishiyama said.

Freshwater is being injected into the No. 3 reactor core in order to prevent overheating of nuclear fuel inside.

The reactor is believed to have suffered core damage, and a hydrogen explosion did extensive damage to the building surrounding the reactor March 14.

Workers restored power in the reactor's control room Tuesday -- a move that officials say could be a key step in efforts to bring cooling systems back online.

This reactor was offline in a scheduled outage when the earthquake hit, but a March 15 fire damaged the building that houses the reactor.

The nuclear fuel rods were in the unit's spent fuel pool, but not in the reactor itself. The reactor's pool of spent nuclear fuel was "possibly damaged," which is why authorities have made repeated efforts to pour water onto the structure. A concrete pump truck has been used to inject seawater into the unit's fuel pool, in order to cool the spent fuel rods.

On Tuesday, workers began injecting freshwater instead of seawater into this pool, Nishiyama said.

Reactors No. 5 and 6 were not in operation at the time of the earthquake and are in "cold shutdown," the Nuclear and Industrial Safety Agency reports.

The reactors were shut down for a scheduled outage when the quake hit and there are no major issues with the reactors and cores themselves. The cooling systems in the pools of spent nuclear fuel are thought to be functioning, though there are continued concerns about keeping power running to the systems.

Three holes were punched in each building earlier to relieve pressure and prevent a feared hydrogen explosion.