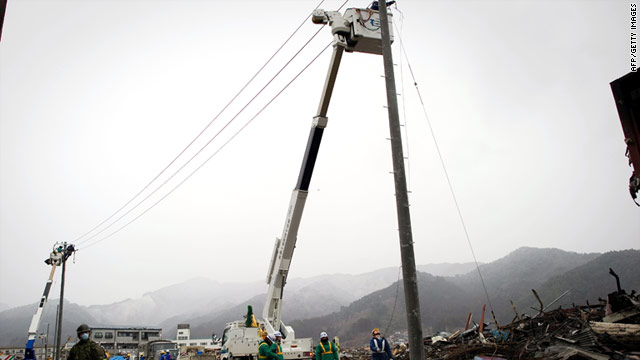 Tokyo (CNN) -- The loss of two nuclear power plants means the Tokyo region will face the summer peak demand with a loss of about 20% of capacity, the plant's owner said Thursday.

Other utilities can supply only a limited amount of additional electricity to the Tokyo Electric Power Co. grid because Tokyo Electric runs power at a different frequency from the rest of the country, according to industry officials.

And with two of Tokyo Electric's nuclear power plants knocked offline since the March 11 earthquake that battered northern Japan, the company said it sees no alternative to a series of rolling blackouts across the Tokyo region.

Tokyo Electric, Japan's largest power utility, uses 50-cycle power, while most of the rest of the country uses 60-cycle electricity. Because of a lack of machinery, only a limited amount of about 1 million kilowatts can be converted and shared, according to industry officials.

What if we did not have nuclear power?

Tokyo Electric said it doesn't yet know how the blackouts will be implemented but said the electric supply will be narrowed by as much as 10 million kilowatts, roughly 20%.

Short of the construction of new power plants, there is no end of the shortage in sight. Some mothballed facilities may be brought back online, but this would not compensate for the loss of the Fukushima Daiichi and Fukushima Daini nuclear plants.

Some blackouts have begun in eastern and northern Japan already.

Both plants have been shut down since the earthquake and tsunami, and Daiichi has suffered several explosions and leaked radioactivity into surrounding areas.

Building conversion facilities to share power from other grids would be almost as expensive as building a new power plant, a Tokyo Electric offical said Thursday.