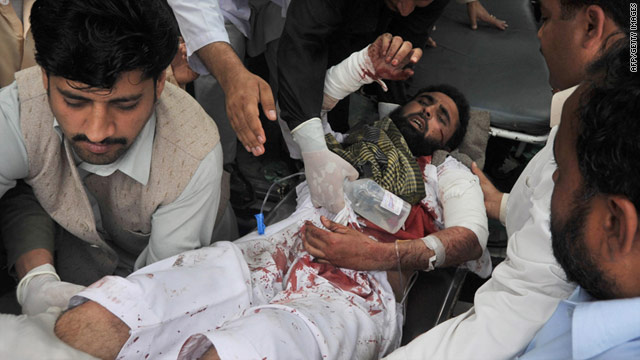 Islamabad, Pakistan (CNN) -- For the second day in a row, a hardline Islamist politician escaped an assassination attempt in northwest Pakistan.

Fazal Ur Rehman, the head of Jamiat-e-Ulama-e-Islam, was headed to a rally in the Khyber Pakhtunkhwa province when a man walked up to his convoy and blew himself up, authorities said.

The bast killed 12 people, including three policemen and two women, said Nisar Murrawat, the police chief of the Charsadda district where the attack took place.

It also wounded 16 others, but Rehman said he was unharmed.

Charsadda is 25 kilometers northeast of Peshawar, the capital of the province.

A day earlier, 10 people, including two policemen, were killed when a suicide bomber on a motorbike blew himself up at another political rally where Rehman was scheduled to speak.

Rehman said he has not received any threats nor does he know who is targeting him .

Moulana Amjad Khan, a party spokesman, said the Thursday rally was the last in a series to protest against un-Islamic laws in the country, the influence of the United States and drone strikes.

Jamiat-e-Ulama-e-Islam was a former coalition partner of the ruling Pakistan Peoples Party.

Security forces have been battling an insurgency led by the Pakistani Taliban in the province, formerly known as the North West Frontier Province.