12 killed in Afghanistan amid protests over reported Quran burning 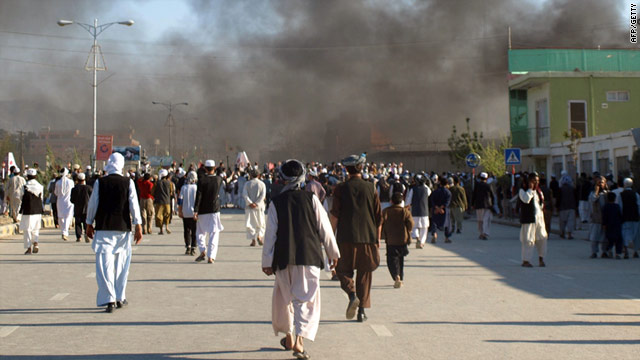 Smoke rises from the U.N. building in Mazar-e Sharif on Friday where 12 people died of violence, including eight U.N. staffers.
STORY HIGHLIGHTS

Check out CNN.com's Afghanistan Crossroads blog for the latest developments, and the Belief Blog for a timeline of Florida's Quran-burning pastor.

Kabul, Afghanistan (CNN) -- Twelve people were killed Friday in an attack on a U.N. compound in northern Afghanistan that followed a demonstration against the reported burning last month of a Quran in Florida, authorities said.

Lal Mohammad Ahmadzai, a spokesman for the police in Mazar-e-Sharif, told reporters that a number of suspects "who might be the main organizers" had been arrested.

"I understand there were hundreds, if not thousands, of demonstrators. Some of them were clearly armed and they stormed into the building."

Five demonstrators were killed in the violence; one person's throat was cut, he said.

The U.N. Security Council met Friday and issued a statement condemning the attack, which occurred at the operations center of the United Nations Assistance Mission in Afghanistan (UNAMA), and calling on the Afghan government to investigate.

Haji Sakhi Mohammad, a businessman in Mazar-e-Sharif, said that the incident began after Friday prayers, when many people joined a protest against the burning of the Quran. People calling "Death to America" marched to the U.N. compound and broke in, he said. At that, gunfire broke out and "I saw protesters shot to death."

The student said some of the protesters found several loaded AK-47s and used them to kill security guards and other people inside the building.

The attack followed a demonstration against the reported burning of a Quran by Florida pastor Terry Jones, who gained international attention last year when he announced that he was planning to burn a Quran, the U.N. source with knowledge of events said.

Jones is the pastor of the 60-member Dove World Outreach Center church near Gainesville. Last year, after an outcry followed his announcement of plans to burn a Quran on the ninth anniversary of the September 11, 2001, terrorist attacks, he canceled them. Last month, however, he reportedly did burn Islam's holy book.

The church says on its website that it planned to put the Quran on trial on March 20, and, "if found guilty of causing murder, rape and terrorism, it will be executed!" Another post on the website, which uses an alternative spelling for the book, says "the Koran was found guilty" during the mock trial and "a copy was burned inside the building."

On Friday, Jones said in an e-mailed statement that the attack in Afghanistan shows that "the time has come to hold Islam accountable."

"We must hold these countries and people accountable for what they have done as well as for any excuses they may use to promote their terrorist activities," he said.

Atta Mohammad Noor, the governor of Balkh province, said the attackers had used the protests against the burning "as a cover for this violence."

"In targeting them, the attackers have demonstrated an appalling disregard for what the U.N. and the entire international community are trying to do for the benefit of all Afghans," he said.

U.S. President Barack Obama also condemned the attack. "We stress the importance of calm and urge all parties to reject violence and resolve differences through dialogue," he said.

White House spokesman Jay Carney said he would not speculate on the motivation behind the attack, but added that it was "in no way justified, regardless of what the motivation was."

The Council on American Islamic Relations also released a statement condemning the attack. "Nothing can justify or excuse this attack," said the group, which describes itself as America's largest Muslim civil liberties and advocacy organization.