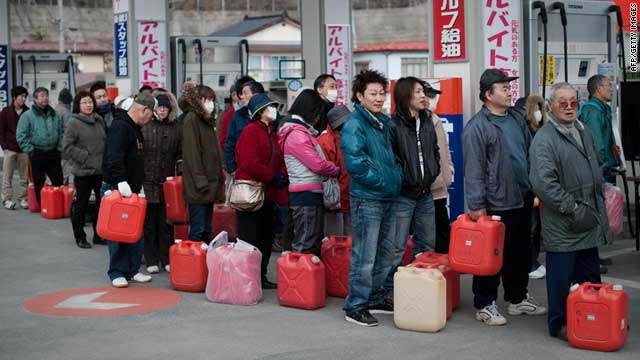 People queue for petrol at a gas station in Yamada, in Japan's Iwate prefecture on Friday, March 25.
STORY HIGHLIGHTS

Tokyo (CNN) -- Told to stay indoors, the residents of one Japanese city near a quake-damaged nuclear plant are now grappling with widespread shortages and appealing for help from outside.

Minami Soma, a city of about 70,000, lost at least 253 people to the March 11 earthquake and tsunami. Another 1,200-plus are unaccounted for, and about 50,000 people have evacuated since the disaster and the ensuing crisis at the Tokyo Electric Power Company's Fukushima Daiichi power plant, 25 km (16 miles) to the south, Mayor Katsunobu Sakurai said.

Those left are now struggling with a "substantial lack of supplies" complicated by the city's location in the 30-km radius surrounding the quake-damaged Fukushima Daiichi nuclear power plant, he said.

"Many people here are left without transportation," Sakurai said in a video appeal for citizen volunteers posted online last week. "They can hardly get any supplies delivered to their homes. We regret to say this, but we have to ask volunteers to act at their own risk."

Since Sakurai's plea, the city says, numerous volunteers have come forward. But the city said it has had to discourage many of them -- ranging from doctors to reconstruction workers -- because there's no need for them until residents are allowed to come back outside.

Minami Soma lies outside the 20-km mandatory evacuation zone, but within the extra 10 km in which Japan's government has urged residents to remain indoors due to the spread of radioactive particles from the plant's quake-damaged reactors. That order "restricted our logistics," Sakurai said, "And with the scarce information we can gather from the government or TEPCO, we are left isolated."

"Since the measure to remain indoors has been taken, all the stores and supermarkets are shut down," he said, noting the shortage of food and fuel. "The banks are closed, the people are literally drying up as if they are under starvation tactics."

Sakurai said radiation levels have been as low as .0015 millisieverts per hour, a fraction of what some towns farther from the plant have received. But the city says truck drivers have still refused to drive in supplies, and municipal workers -- who have been bunked down in City Hall offices -- don't have the fuel to bring them into town themselves.

"I am hoping that the volunteers could share the burdens they are handling. Please give your support to get over this extreme difficulty together," Sakurai said.

Officials in Tokyo had no immediate comment on Sakurai's plea. But at a news conference Friday evening, Prime Minister Naoto Kan said the government was trying to get aid to the people in the 20-30 km zone.

We regret to say this, but we have to ask volunteers to act at their own risk.
--Katsunobu Sakurai, Minami Soma mayor
RELATED TOPICS

"I recognize that the residents face inconveniences in their life besides the safety issue," Kan said. "I am now taking steps to deal with the situation, so they can procure materials and so on they need for their life."

Japan's government drew a 20-km circle around Fukushima Daiichi on March 12, as engineers battled to prevent a meltdown after the plant's cooling systems were knocked out by the tsunami. It added the 10-km shelter zone on March 15, after explosions had rocked three of the six reactor buildings and a fire damaged a fourth.

Yukio Edano, the government's point man on the crisis, warned Friday that those evacuated would not be returning home in "a matter of days or weeks."

"At this point in time we still cannot give you a specific time frame, but we admit, the time frame is going to be a longer term," he said. But he said the government would work to keep children in school and help find jobs for displaced residents "to reflect a time frame that is rather protracted."