Dog rescued after quake going back to its owner 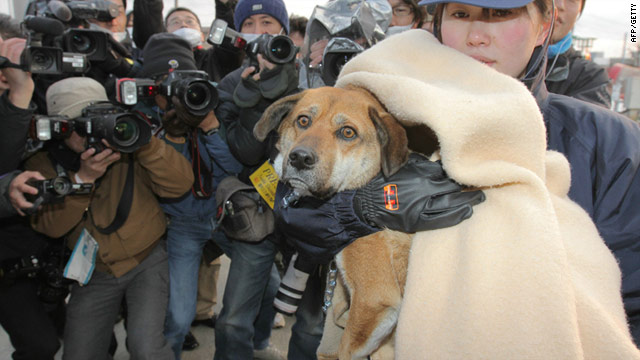 Ban -- spotted by a helicopter rescue team almost 2 kilometers off shore -- will be reunited with her owner Monday.
STORY HIGHLIGHTS

(CNN) -- A dog rescued off the Japanese coast floating on top of a house is on her way back to her owner Monday.

The dog wagged its tail and jumped up to a woman described by local media as a relative of the owner as she collected her to deliver back to her family for what promises to be a warm reunion.

It turns out the lucky dog's name is "Ban," and she was originally living in Kessenuma before being separated from her master after the March 11 earthquake, tsunami and subsequent fire that swept through the coastal village.

It's not clear how the 2-year-old mixed breed Ban and her master were separated, but Kessenuma is located in Miyagi prefecture, which was virtually wiped out by the disaster three weeks ago.

Dog rescued after being adrift on roof
RELATED TOPICS

An employee at the Miyagi Animal Care Center told CNN by phone that the owner had been staying in a temporary relocation center in Sendai since being evacuated from Kessenuma.

The 50-year-old man reportedly recognized Ban after footage of the brown and black dog was shown being hugged by Japanese rescue workers while being unloaded from a boat in Shiogama Port this past Friday.

When a patrol boat got the hungry and shivering dog, they found no identification on her other than a brown collar.

The prefectural animal center says it is still keeping more than a dozen cats and dogs that have been found in recent weeks in hope of further happy endings like the one Ban appears to have gotten.