Indian activist says he is willing to die to end corruption 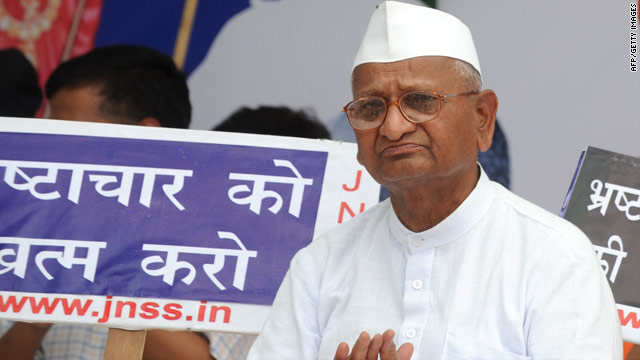 Activist Anna Hazare sits on a platform in New Delhi on April 5 after beginning a "fast-unto-death" against corruption.
STORY HIGHLIGHTS
RELATED TOPICS

New Delhi, India (CNN) -- A veteran social activist in India has launched an indefinite hunger strike to seek tough, overarching laws to tackle corruption as a rash of scandals undermined the reputation of the country's government.

His campaign, supported by numerous social reformists, has come in the wake of a series of high-profile alleged scandals that have rocked Prime Minister Manmohan Singh's administration and investor confidence in Asia's third largest economy.

Hazare is demanding that a long-pending citizen ombudsman legislation, called the Lokpal bill, be widened in its scope.

Hazare and his supporters reject the bill in its present form because it does not empower the proposed bodies to prosecute corruption suspects.

Anti-graft crusaders have come up with their own draft of the legislation that seeks to create citizen ombudsman completely free from political influence and with wide-ranging jurisdiction.

"This fast-unto-death is a reflection of the people's anger at growing, all-round corruption ... at a time when the scourge is eating into the vitals of our society," said political commentator K.G. Suresh.

A day before Hazare, 72, began his hunger strike, the office of the Indian prime minister expressed its "deep disappointment" over the protest.

Singh's office noted in a statement that the prime minister met with Hazare and his colleagues last month.

"I appreciate and share your concern on corruption," the statement quoted Singh as having told Hazare.

Nonetheless, a subsequent meeting between social activists and a federal committee ended unsuccessfully over demands the government accept their version of the bill in totality, Singh's office said.

As politicians from different parties visited Hazare at Jantar Mantar, the reformist announced he would allow no leader to share his platform.

Rather, Hazare alleged corruption was all pervasive in India's political establishment with only few exceptions.

Last weekend, a former government minister in India was among a dozen defendants charged in a multi-billion-dollar telecom scandal.

Andimuthu Raja, a former telecommunication minister, is accused of being involved in a scheme involving the underselling of cell phone licenses at the height of India's lucrative telecom boom.

Police have questioned several high-profile executives in connection with the suspected below-price sale of radiowaves in 2008.

Politicians, bureaucrats, and corporate officials linked to the probe have denied any wrongdoing.

According to a government audit, the treasury lost as much as $31 billion from the 2008 sale of the second-generation wireless spectrum.

The damning audit report came on the heels of allegations of massive fraud in sports and real estate.

Two parliamentary committees are conducting separate inquiries into the case.

Investigators are already probing complaints of financial malfeasance in the Commonwealth Games that India hosted in October last year.

Several politicians, military officials, and bureaucrats have also been the subjects of a separate inquiry for allegedly taking apartments meant for war widows.