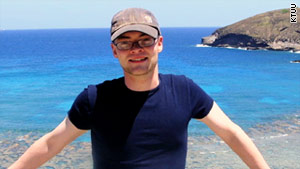 (CNN) -- The body of a second American has been found in Japan, the U.S. State Department's Bureau of Consular Affairs said Wednesday.

"Our heartfelt condolences go out to his family," the bureau said in a statement, identifying the American as Monty Dickson. "Out of respect for their wishes, we do not have further comment."

It was unclear when Dickson's body was found. In the areas hardest hit by the March 11 magnitude-9.0 earthquake and subsequent tsunami, all U.S. citizens are accounted for, the embassy said, although others may be missing in areas that were not among the hardest hit.

Are you there? Share your photos and videos if you can do so safely.

Dickson, 26, taught English at schools around Rikuzentakata, according to the Anchorage Daily News in Anchorage, Alaska, where he was from. He was part of the Japan Exchange and Teaching Program, the newspaper said.

Rikuzentakata is in Iwate Prefecture on Japan's northeastern coast.

"It's really sad, but the torture of not knowing was just unbearable," relative Gloria Shriver told the Daily News on Tuesday. She said the family was working on getting to Japan this week to bring home his body.

"It's been difficult, to say the least," she said.

The body of Taylor Anderson, 24, was found March 21. Anderson taught English to elementary and middle school students in Ishinomaki, a coastal city in Miyagi Prefecture, also as part of the Japan Exchange and Teaching Program.

The death toll in Japan stands at 12,596, according to Japan's National Police, with 14,747 others missing.