China says Ai Weiwei is being held for economic crimes 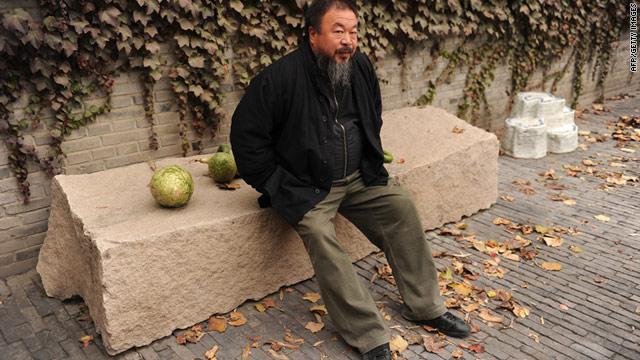 Ai Weiwei, shown in this file picture, has not been seen since Sunday when he was en route to Hong Kong.
STORY HIGHLIGHTS

"It has nothing to do with human rights or freedom of expression," ministry spokesman Hong Lei told reporters during a regular weekly briefing.

The ministry added that other countries should respect China's laws.

The ministry's comments were China's first acknowledgment that Ai was being held. On Wednesday, a newspaper article alluded to it, but attributed the information to international news reports.

Hong stopped answering questions after journalists repeatedly pressed him to elaborate on the economic crimes charge.

Gao Ying, Ai's mother, told CNN that she is is very worried about her son.

"There is no where I can ask about his whereabouts," Gao told CNN. "I would sell my house (for the money) to go to court if necessary... I will go to the prison with him. I would die there with him."

Gao also told CNN in no uncertain terms that she believes the charges against her son are ridiculous.

Gao added, "I don't believe my son is (an) economic criminal. We don't have any economic problem."

Ai's lawyer, Liu Xiaoyuan, told CNN that Ai's family had been to Beijing's Public Security Bureau but could not get any information about him.

"We're still not sure why he was taken away," Liu said. "There are several kinds of economic crimes and we're not sure which one Ai was committed."

The artist has not been seen since Sunday, when he and an assistant said on Twitter that they had been taken into custody en route to Hong Kong.

On Wednesday, China broke its silence on Ai's absence with a pair of articles in a Communist party newspaper.

CNN's Eunice Yoon and Helena Hong contributed to this report.