Boy in Pakistan tells police of school for suicide bombing 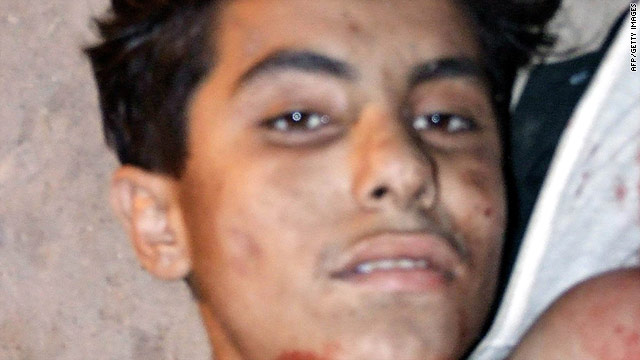 Islamabad, Pakistan (CNN) -- A sorrowful Pakistani teen suspected of collaborating in this week's deadly suicide bombing at a Sufi shrine is claiming to police that scores of his young peers at a camp in the nation's perilous tribal region are being trained to stage attacks.

"I did a wrong thing," Umar Fidai said from his hospital bed aired on national TV Friday. "Please forgive me."

Fidai was arrested alive after the suicide bombing at a Sufi shrine on Sunday killed at least 41 people and wounded more than 100. The blast occurred in Dera Ghazi Khan in Punjab province.

The boy hails from a village in the Pakistani tribal district of North Waziristan, an area that is next to war-torn Afghanistan. The Taliban and al Qaeda have had a strong presence in the region, and Sunni Muslim militants based in Pakistan have staged attacks in Afghanistan.

Fidai said in TV interviews he got suicide bombing lessons for six months, including training to use pistols, grenades and a suicide jacket. He said an Afghan Taliban leader named Mullah Sangeen was in charge of the training camp.

He said he had been recruited one day as he was coming home from school, when a Taliban leader named Qari Zafar met him and persuaded him he would go to heaven if he carried out a suicide attack.

"The moment you will press the button of your suicide jacket, you will immediately go to heaven," Fidai said Zafar told him.

"I was only keener to go to heaven. I never thought about my family members during the training," said Fidai, whose father is dead and whose two younger sisters live in Esa Khel, his home village.

Fidai gave the interview in police custody. It is unclear how representative his comments are of his own opinions or experiences.

Ahmed Mubarak, the police chief of the Dera Ghazi Khan district, said the teen told police that more than 300 boys between ages 12 and 17 are being trained in North Waziristan's Mir Ali area to stage suicide bombings.

The boy also told police that Uzbeks and Tajiks are among the militants in that region of Pakistan, indicating the presence of foreigners there.

In his televised comments, Fidai advised the boys in training that the strikes are un-Islamic and that they should refuse to stage them.

In the bombing Sunday, a man blew himself up when he was stopped at the entrance of the Sakhi Sarkar shrine, and a second would-be suicide bomber wearing an explosives-laden jacket was arrested, Mubarak said.

The shrine is on the outskirts of the district capital, more than 400 kilometers (about 250 miles) south of Peshawar.

Dera Ghazi Khan is no stranger to violent bombings. Dozens of people were killed in a December 2009 bombing that ripped through a market near the home of a provincial official.

Another blast earlier that year struck a crowd of Shiite Muslims as they took part in a procession toward a mosque, killing scores of people.

Pakistan is largely Sunni Muslim, and militants there have targeted religious minorities, like Shiites, Sufis and Christians.