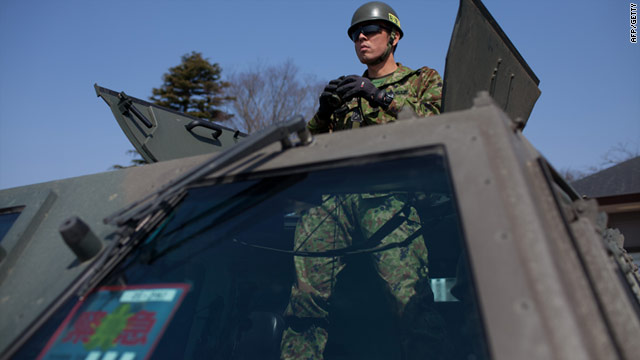 A soldier taking part in search operations Sunday at the tsunami-devastated port area of Ishinomaki in Miyagi prefecture.
STORY HIGHLIGHTS

Tokyo (CNN) -- About 22,000 Japanese troops launched an extensive search for victims of last month's earthquake and tsunami along the country's northeastern coast Sunday as the death toll from the nearly month-old disasters passed the 13,000 mark.

About 110 U.S. troops will be part of the search in the northern prefectures of Iwate, Miyagi and Fukushima, Japanese military officials said.

Japan's National Police Agency reported Sunday that the death toll from the March 11 disaster had risen to 13,013, with another 14,608 still missing. Earlier Sunday, police said 4,683 people were injured. More than 151,000 others have been displaced, the agency reported.

In addition, at least two deaths and 283 injuries have been blamed on a Thursday night aftershock, a magnitude 7.1 tremor that had left 250,000 in the dark Saturday night.

Japan is still reeling for the the massive magnitude-9.0 quake, as well as the crisis spawned when the resulting tsunami crippled the Fukushima Daiichi nuclear power plant. Communities across northern Japan planned to hold solemn commemorations of the event Monday, including moments of silence to mark one month since the disaster struck.

Meanwhile, a key transportation hub in Sendai -- one of the worst-hit areas -- is preparing to start up operations again. Limited commercial service at the airfield south of the city and near the coast will be restored Wednesday, authorities and airlines said. The re-opening of the airfield will bring relief to the region, which is still without express train service. Many roads and dozens of railroad lines and stations also were knocked out by the disaster.

The Japanese airline ANA announced Saturday that it will make three "relief" flights daily to and from Tokyo's Haneda airport, while rival Japan Airlines said it will operate three flights a day into Sendai from Haneda. But the airlines say it will be at least the end of May before regular service to Sendai will be restored.

A Japanese researcher said Friday that residents in eastern Japan, including Tokyo, can expect more aftershocks in the coming months.

"We should not be surprised to have magnitude-7 level aftershocks even a year afterward anywhere as wide as east Japan in the wake of such mega-quake of magnitude 9," said Satoko Oki of Tokyo University's Earthquake Research Institute.