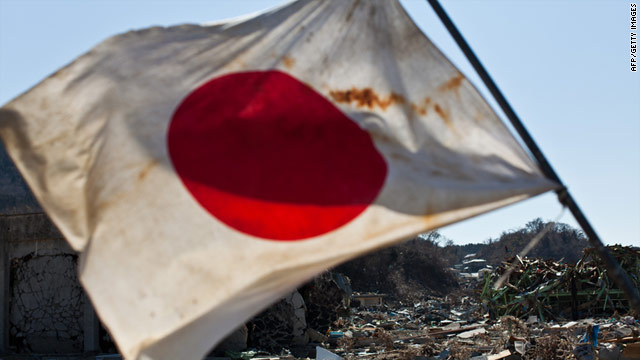 A Japanese flag stands amid the devastation of the tsunami in the town centre of Onagawa, Miyagi prefecture, on April 6, 2011.
STORY HIGHLIGHTS

Tokyo (CNN) -- Japanese Prime Minister Naoto Kan invoked his country's recovery from World War II on Tuesday as he sought to turn the nation's attention to the arduous task of rebuilding.

Yet the challenges awaiting Japan remained on full display the day he spoke: The country rated the crisis at a nuclear plant stricken after last month's earthquake and tsunami as the most severe on an international system for rating nuclear accidents.

And a fresh round of earthquakes rumbled across an already battered landscape. One with a magnitude of 6.3 was the latest of 52 quakes with a magnitude of 6 or greater since a monster 9.0 quake rocked the country and spawned a tsunami, leaving nearly 28,0000 people dead or missing.

The prime minister noted that he was born in 1946, a year after the end of World War II, and that his family used an unexploded bomb to help stabilize a pickling tub in their home. He said the Japanese people "stood up bravely and achieved a reconstruction that amazed the world" after the war.

"We must renew the determination that we had in the post-World War II reconstruction period, and we must tackle the task of reconstruction after this earthquake," he said.

The devastation left behind by the March 11 earthquake is an opportunity to build "a new, better future than before," said the prime minister. He spoke at a news conference that had been originally scheduled to take place Monday but was delayed because of a series of aftershocks that rattled northern Japan.

In one of the lastest developments following the wave of aftershocks, the Iwaki Fire Department said the death toll from landslides set off by a 6.6-magnitude quake on Monday had risen to six.

Iwaki is located about 100 miles (164 kilometers) northeast of Tokyo and about 30 miles (50 kilometers) southwest of the crippled Fukushima Daiichi nuclear plant, according to the U.S. Geological Survey. The landslides in Iwaki buried three houses.