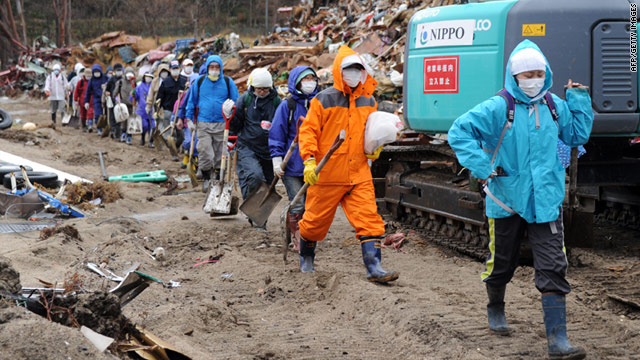 Ofunato, Japan (CNN) -- More than a month after the devastating tsunami and earthquake that flattened seaside communities across northern Japan, many aid groups are wrapping up operations. One team of volunteers is just ramping up, however.

For those wondering what they can still do to help, the U.S.-based charity All Hands has an answer: Buy a plane ticket, and come ready to get to work.

"What we do is come in after natural disasters all around the world and help people by bringing in volunteers in the recovery process," said Marc Young, the charity's operational director in Ofunato, a small port city on Japan's northeastern coast.

Ofunato was swamped in the tsunami that left nearly 500 dead and missing. The survivors are now faced with a mountain of debris to clear and a need to find new homes for more than 6,500 people.

By Monday, the U.S.-based secular nonprofit had 23 volunteers from the United States, Canada, Britain and Australia working alongside Japanese from across the country. They were cleaning out houses and businesses and helping people salvage any personal goods and gear they could.

Chris Turner, a staff project coordinator for All Hands, just arrived from working in Leogane, Haiti. Unlike Haiti, the poorest country in the Western Hemisphere, Japan is the world's third-largest economy and its government is functioning. Help is still needed, however.

"Some people, what they most like to donate is their hard work," says Turner, a Canadian. "We kind of give people that opportunity."

The group is staying at a nearby house donated by a local resident and are getting a campground up and running to service the expected 100 volunteers who are streaming in every day. All Hands also is setting up a "smart distribution" warehouse to better allocate donated goods to the people who need them.

In the immediate aftermath of the quake, truckloads of donated food, clothes and household goods were sent in. Now there are huge pallets of toilet paper, plates and other scattered goods from people who were well-meaning, but unclear on what was needed.

"We think that there is enough shampoo and detergent here for every person in every shelter to use a bottle a day for a year," Young said.

There are few baths or working washing machines in the area, and what people really need is fresh food, he said. Most people have temporary shelter, and All Hands is forming a partnership with Habitat for Humanity to build 50 new homes.

The group also is working with local leaders to team volunteers with Japanese carpenters to pull out waterlogged floors and walls from homes that are otherwise structurally sound.

"It's rewarding to get all the debris out of the homes," Young said. "But it's especially exciting to take the next step and get people back in to their own homes."

The group members are from all over the world, but All Hands says they had to pick the first volunteers from among thousands of offers based on skills they could contribute. Amya Miller, a volunteer from Boston, was born and raised in Japan, and now works as an interpreter.

Miller said she her family and business on hold for two months to come and help in Japan and called in every favor she was ever owed to raise money.

"You can't forget about these people," she said. "This is a multi-year recovery process."