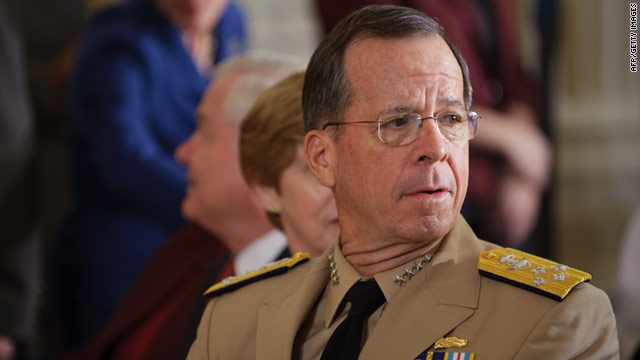 (CNN) -- Responding to an allegation by the U.S. chairman of the Joint Chiefs of Staff that Pakistan's main intelligence agency has a "longstanding relationship" with a Taliban-allied insurgent group that targets U.S. troops in Afghanistan, a senior Pakistani intelligence official said: "We do have a relationship: that of an adversary."

In an interview that aired Wednesday on Pakistan's Geo TV, Adm. Michael Mullen spoke forcefully about the Haqqani Network, which he said "very specifically facilitates and supports the Taliban who move in Afghanistan, and they're killing Americans."

Based in Pakistan's North Waziristan frontier, the Haqqani Network "has been at the forefront of insurgent activity in Afghanistan, responsible for many high-profile attacks," according to the United Nations. The group is believed to have three main sources of funds: donations from the Persian Gulf region, drug trafficking, and al Qaeda payments.

Other U.S. officials in recent months had expressed concerns that Pakistan has not been aggressively confronting militants operating in the tribal regions.

The Pakistani intelligence official told CNN that "we have our hands full" fighting other Islamist militant groups along the border with Afghanistan, notably those under the umbrella of the Lashkar-e-Tayyiba (LeT) "and once we are through with them we can turn on the other (the Haqqanis). We do not have the capacity to undertake simultaneous operations."

Asked if offense was taken by Mullen's remarks, the intelligence official said: "Not personally, no."

Earlier in the Geo TV interview, Mullen was pressed on issues such as the arrest of CIA contractor Raymond Davis and unmanned drone strikes against targets within Pakistan, which have marked what he called a "rough patch" of increasingly complex relations between the two nations in recent months.

The admiral traced the difficulties back to the 12-year period in which the two countries had severed diplomatic ties, then restored them in the midst of the global terrorism crisis that followed the attacks of September 11, 2001.

"We can't snap our fingers and say all of the sudden we trust each other," he said, "and that's what we're trying to work our way through in the midst of these huge terrorist challenges that we both have."

"It's the focus from the United States' perspective on the terrorist threat (in the Federally Administered Tribal Areas), the al Qaeda leadership which still lives there and still threatens to kill as many Americans as they possibly could, combined with what I would call this federation of terrorist organizations that are getting along more than they used to, and at least from my experience ... the complexity is increasing, not decreasing."

As Joint Chiefs chairman, Mullen is the highest-ranking uniformed official in the U.S. military's chain of command. He has been part of recent discussions that have included CIA Director Leon Panetta and their Pakistani counterparts: Chief of Army Staff Gen. Ashfaq Parvez Kayani and the ISI's director, Lt. Gen. Ahmad Shuja Pasha.

Mullen's term is set to end this year.

"It's been a very rough patch lately," Mullen said, "and I think the leaders, including Generals Pasha and Kayani, Director Panetta and myself and others are very committed to working our way through this because we see the need to solve this problem, and we just can't walk away from it."