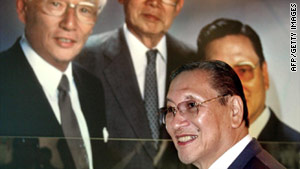 Tokyo (CNN) -- Norio Ohga, the former president and chairman of Sony Corporation who helped to develop the compact disc, died Saturday of multiple organ failure, the company said. He was 81.

Ohga worked for what is now Sony as a consultant and adviser while still a music student in Tokyo, before joining the company full time in 1959.

He rose to the ranks of chairman and president and is credited with driving the company's growth in movies, video games and music.

Ohga saw the potential of the compact disc early and spearheaded Sony's efforts in that area, the company said.

His training as a musician led him to push for a 12-centimeter format, providing enough storage to allow listeners to hear all of Ludwig van Beethoven's Ninth Symphony without interruption, according to Sony. Those specifications are still in use today.

The company sold the world's first CD in 1982 and within five years, CD sales overtook LP record sales in Japan.

Ohga is also credited with launching Sony's game business and was head of Sony when it bought Columbia Pictures in 1989.

He was a senior adviser to Sony at the time of his death.

"By redefining Sony as a company encompassing both hardware and software, Ohga-san succeeded where other Japanese companies failed. It is no exaggeration to attribute Sony's evolution beyond audio and video products into music, movies and games, and subsequent transformation into a global entertainment leader to Ohga-san's foresight and vision," Sony Chief Executive Howard Stringer said in a statement.

"I offer my deepest condolences on his passing and pray that he may rest in peace."