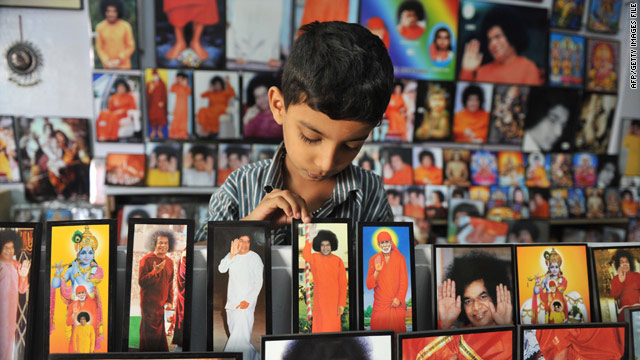 An Indian child looks at portraits of Spirtual Leader Sri Satya Sai Baba at a shop near Prashanthi Nilayam on April 6. One of India's best-known spiritual leaders, known for his apparent miracles and long list of influential followers, died on Sunday.
STORY HIGHLIGHTS
RELATED TOPICS

The orange-robed spiritual leader with a puff of dark hair is considered a living god by his followers in India and overseas.

His followers believe he has supernatural powers. However, critics have accused him of fraud and sexual abuse, allegations he has denied.

The guru claimed to be a reincarnation of Sai Baba of Shirdi, one of India's greatest spiritual figures, who died in 1918.

Authorities have tightened security around the town since his condition started worsening.

In a hospital bulletin, doctors did not use the word death to announce his passing.

It said he was "no more with us physically" and that he left "his earthly body" on Sunday.

He inspired millions to lead a meaningful life regardless of their religions, the prime minister said.

"His teachings were rooted in the universal ideals of truth, right conduct, peace, love and nonviolence," he said. "I express my sincere condolences to the millions of his followers, disciples and well wishers."

The guru has set up various health, education and charity organizations.

His body will lie in state for two days so his followers can pay their respects, according to the hospital, which is funded by his organization.