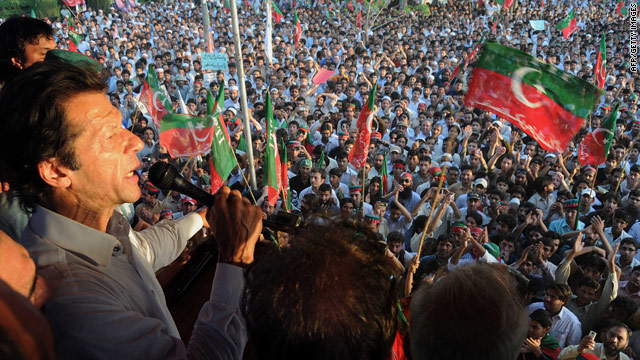 (CNN) -- A Pakistani opposition leader on Sunday threatened to have supporters block NATO supply routes to Afghanistan and march to Islamabad if U.S. drone strikes in the country were not halted.

Imran Khan, a famous former cricket player and the head of the Pakistan Tehrik-e-Insaf, or justice movement party, made the ultimatum at the end of a two-day sit-in in Peshawar in protest of the drone strikes, which he says have killed civilians.

His pressure appeared to be aimed most directly at the Pakistani government, which is cooperating with the United States to allow the strikes.

"If drones are not stopped, we all will move towards Islamabad," the Pakistani capital, Khan said.

Khan's party, a small, right-wing group that doesn't have any representation in parliament, is nonetheless popular among the country's youth.

Between 8,000 and 10,000 people attended the second day of the sit-in in Peshawar, which blocked one of the routes used by NATO to send supplies from Pakistan to Afghanistan. NATO supplies are transported from the port in the southern city of Karachi to Afghanistan through two routes.

"A drone strike made me an orphan," said one sign held by Jamal Khan, an 8-year-old who lost his father in a drone strike last year.

Siraj Ahmed, the top government official of Peshawar district, told CNN he came to know that the contractors who transport the NATO supplies from the route where sit-in was organized suspended their routes during the protest.

"Practically, the protesters have stopped the supply to NATO in Afghanistan by blocking one of the two routes for (a) couple of days," Ahmed said.

The United States says that the drones target only militants, but civilians have been reportedly killed as well, making their presence unpopular in the country.

"Pakistanis aren't animals who can be killed by drones," Khan said Saturday. "They have human rights, as Americans do."