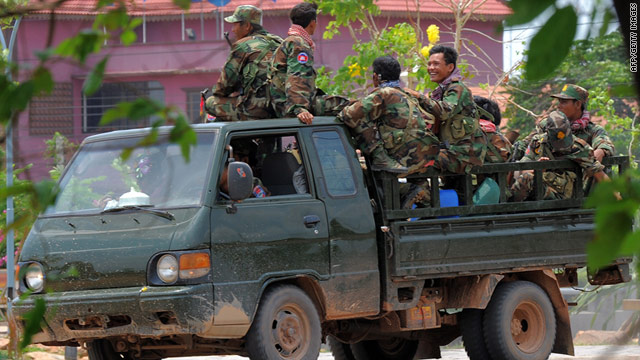 Cambodian soldiers travel in a military truck along a street near the border with Thailand on Monday.
STORY HIGHLIGHTS

Bangkok, Thailand (CNN) -- Clashes over a disputed area along the Thai-Cambodian border erupted for a fourth consecutive day Monday, resulting in the death of a Thai soldier, a military official said.

Four other Thai soldiers have been killed since the fighting started Friday, according to Col. Sansern Kaewkumnerd.

Authorities have evacuated thousands of people from nearby villages.

Each side blames the other for the violence, which first broke out last week near two temples in the Phanom Dong Rak district of Thailand's Surin province.

Cambodia's government has said three of its troops have been killed.

The fighting on the ground has been coupled with a war of words in recent days.

Cambodian officials could not be immediately reached for comment. A statement from the country's defense ministry Saturday described the clashes as an "assault by Thai infantry units," accusing Thailand of flying spy planes into Cambodia and attacking with heavy weapons.

The U.S. government is speaking directly to Thai and Cambodian officials, and also supports efforts by Indonesia, the chair of the Association of Southeast Asian Nations, to work with both countries on a resolution, Clinton's statement said.

In February, at least 10 people were killed when fighting flared up in another disputed border area between the two nations, prompting the United Nations Security Council to issue a statement calling on both sides to implement a cease-fire.

Those clashes, which lasted four days, stemmed from a longstanding conflict related to the 11th-century Preah Vihear temple. Both Cambodia and Thailand lay claim to the temple, which sits atop a cliff on Cambodian soil but has its most accessible entrance on the Thai side.

At the time, each nation accused the other of firing first.