India bids farewell to ascetic revered as a 'living god' 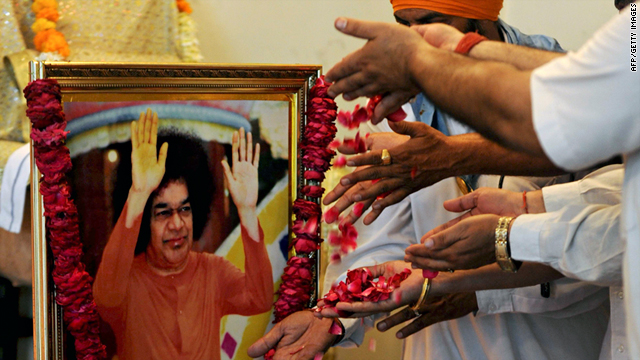 New Delhi, India (CNN) -- Famed Indian spiritual guru Sri Sathya Sai Baba was laid to rest Wednesday as hundreds of thousands of followers bid a tearful farewell to the ascetic they revered as a living god.

Hymns rang through his ashram at his hometown of Puttaparthi in southern India as his body was sprinkled with petals and holy water before a private burial behind a maroon curtain.

A number of luminaries attended the funeral conducted with full state honors.

On Tuesday, Indian Prime Minister Manmohan Singh and the Italian-born head of his Congress party, Sonia Gandhi, paid their tribute as they filed past the guru's saffron-robed body placed in a glass casket and sat beside it as a mark of respect.

Recognizable with his trademark puff of dark hair, Sri Sathya Sai Baba claimed to be a reincarnation of Sai Baba of Shirdi, one of India's greatest spiritual leaders, who died in 1918.

In a hospital bulletin on Sunday, doctors did not use the word 'death' to announce his passing.

It said he was "no more with us physically" and that he left "his earthly body."

In his condolence message on the day Sri Sathya Sai Baba died, Singh remembered the spiritual leader for inspiring millions to lead a meaningful life regardless of their religions.

"His teachings were rooted in the universal ideals of truth, right conduct, peace, love and nonviolence," Singh said.