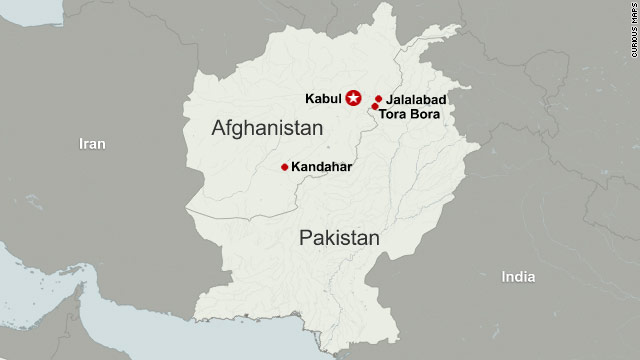 (CNN) -- How did Osama bin Laden escape the dragnet that closed in around his mountain hideout in Afghanistan in December 2001?

It's long been a topic of discussion in intelligence circles and among those (myself included) who witnessed the intense U.S. aerial bombardment of Tora Bora that went on for nearly two weeks. Many analysts have suggested that bin Laden slipped through mountain passes into Pakistan, just a few miles away. But assessments of Guantanamo Bay detainees suggest he went in another direction, evading the mujahideen of the Northern Alliance, as well as the small detachments of U.S. special forces who we first saw in the area around December 8th.

The detainee assessments were made public by Wikileaks this week and published by the Washington Post, the Guardian and other media outlets.

One of them, compiled in 2007, is about a detainee called Harun Shirzad al-Afghani. Al-Afghani was a commander in the militant group Hezb-e-Islami Gulbuddin, a close ally at the time of al Qaeda. Al-Afghani claims that the al Qaeda leader escaped the area thanks to a Pakistani militant and cleric called Maulawi Nur Muhammad. And he says bin Laden headed north toward Jalalabad and later to the remote province of Kunar in north-east Afghanistan.

In a few brief paragraphs at the end of his profile, al-Afghani is quoted as saying that he was directed by Afghan warlord Gulbuddin Hekmatyar to "link up with al Qaeda forces in Tora Bora and exfiltrate OBL from the region." That group "lost radio contact with the Arabs in Tora Bora." (Hekmatyar, incidentally, is still a serious player in the region, loosely allied to the Taliban and regarded by many analysts as a critical part of any peace deal in Afghanistan.)

And so Plan B came into play. Al-Afghani says Maulawi Nur Muhammad provided about 40 to 50 fighters to escort bin Laden and his deputy Ayman al-Zawahiri away from Tora Bora. His help followed a meeting with an al Qaeda commander called Abu Turab al-Urdani, who also happened to be Zawahiri's son-in-law. According to the detainee assessment of al-Afghani, "Maulawi Nur Muhammad informed him of their escape approximately ten months after Tora Bora. Detainee's associate, Haji Abdul Abad, who directed a suicide operation targeting U.S. personnel in Jalalabad between August and September 2005, verified the details of UBL's escape." (UBL is the short-hand used for the al Qaeda leader throughout the detainee documents.)

Other Guantanamo assessments seen by CNN suggest that bin Laden abruptly left Tora Bora on December 11. "UBL suddenly departed Tora Bora with a few individuals UBL selected," reads one report. His bodyguards left a day or two later and climbed the passes through the White Mountains into Pakistan, where they were detained by Pakistani paramilitary forces on December 15. Other detainees talk about an exodus of fighters around December 16 after negotiations with local Afghan commanders failed. The CNN team close to Tora Bora at the time was aware of and reported on radio contacts between the two sides, and it was evident that the poorly-equipped local militia sent to flush out al Qaeda militants had little appetite for the job. Hence the escape of senior figures in al Qaeda through the many ravines and valleys of the area.

Perhaps bin Laden suspected the frontier with Pakistan would be too dangerous to cross. In any event, al Afghani says he traveled to a safe-house near the city of Jalalabad to rest -- before traveling on horseback towards Kunar. Kunar is rugged, violent and to many observers ungovernable -- a province where even today the Taliban and al Qaeda have a substantial presence and where coalition forces face persistent attacks. Al-Afghani says bin Laden remained in Kunar until late in 2002 before crossing the border into Pakistan.

While al-Afghani's account is impossible to confirm, he had serious credentials as a courier and facilitator for al Qaeda until his capture in February 2007 close to Jalalabad. The document says the "detainee has provided unique information on al Qaeda's organizational structure and operations." And it fits with what CNN has learned from other sources.

One man well connected with the al Qaeda leadership at the time was Noman Benotman, then a senior figure in the Libyan Islamic Fighting Group, which had ties to al Qaeda. He was in phone contact with another Libyan close to bin Laden -- Abu Leith al Libbi -- after 9/11. Benotman told CNN Terrorism Analyst Paul Cruickshank that when al Libbi asked for reinforcements for the battle around Kabul, bin Laden's response was: "Whoever fights the Americans must follow us to Tora Bora." (Benotman is now a senior analyst at the Quilliam Foundation, a UK counter-terrorism think tank.)

He told CNN that when considering his exit bin Laden knew not to trust local people across the border in Pakistan -- a lawless area where criminals and drug traffickers would not have thought twice about trading the al Qaeda leader for the bounty on offer by the United States of $25 million.

Benotman says tribes around Jalalabad helped bin Laden hide after his escape and, like al-Afghani suggests, that he probably stayed in Afghanistan for about a year before crossing into Pakistani tribal territory.

Bin Laden's escape from Tora Bora was the last stage of a three-month odyssey between the 9/11 attacks and the bombing of Tora Bora. The detainee profiles suggest that in the immediate aftermath of 9/11 he was active meeting supporters, traveling between Kandahar and Kabul, and arranging for his wives and family members to escape U.S. bombing of Kandahar. And he was flush with cash. One document suggests he donated $100,000 to local tribal leaders around Jalalabad before heading to his Tora Bora redoubt. But as his hard core of supporters fled in disarray or were caught, he had to borrow $7,000 from Maulawi Mur Mohammed, the man who helped him flee from Tora Bora, according to al Afghani. It's unclear what happened to Mohammed.

On a personal note, when I finally left the area just before Christmas 2001, I traveled with a Pakistani "fixer" working with CNN -- a man with encyclopedic knowledge of the region and its many local alliances and rivalries . As we drove from Jalalabad to the border with Pakistan, the mountains loomed on both sides: Tora Bora to the south and the wilds of Kunar in the distance to the north. Our fixer gestured north. "There are places up there where man has never set foot," he said. "I believe that's where bin Laden has gone." He may well have been right.