Arrests made in Afghan jailbreak 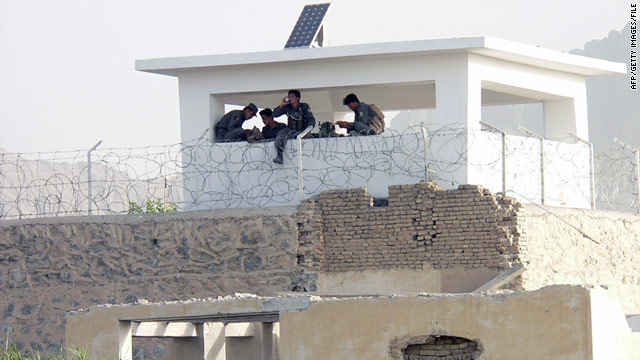 In this photograph taken on June 14, 2008, Afghan policemen sit in a guardhouse at the entrance to the main jail in Kandahar.
STORY HIGHLIGHTS

Kabul, Afghanistan (CNN) -- The head of a Kandahar prison where a mass escape occurred this week was among 20 people arrested Thursday on suspicion of assisting the jailbreak, a senior prison official told CNN.

Suspicions have run high that -- given the ease and scale of the escape -- there was some inside help at the prison. Guards as well as officials on duty during the night of the escape were arrested.

"The escape of the prisoners are not possible without authorities' cooperation," said Gen. Amir Mohammad Jamshid, the chief director of jails in Afghanistan.

Ghulam Dastagher Mayar, the chief director of the Kandahar jail, is among the arrested officials.

Taliban prisoners tunnel out of jail

Monday's break was the second escape at the prison in three years. In 2008, as many as 1,000 prisoners -- nearly half of them Taliban members -- escaped after militants detonated a truck bomb against the side of the prison compound.

Afghan authorities said Tuesday they have recaptured 65 of the more than several hundred inmates who slipped out of the prison through a nearly quarter-mile tunnel dug beneath the compound.

A massive search operation continues to find the others -- many of them insurgent fighters, said the Kandahar governor's office.

The prison houses some of the country's most dangerous Taliban prisoners, and the escape was an embarrassment for the Afghanistan government and its Western allies, said CNN National Security Analyst Peter Bergen.