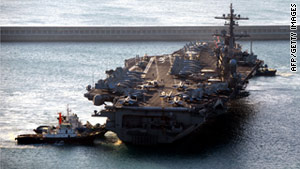 The religious rites were conducted on the deck of the USS Carl Vinson in the Arabian Sea.
STORY HIGHLIGHTS
RELATED TOPICS

Washington (CNN) -- Osama bin Laden was buried at sea from the deck of a U.S. aircraft carrier because there was no alternative to bury him on land within the 24 hours required by Islamic law, President Barack Obama's homeland security and counterterrorism adviser said Monday.

"The disposal of -- the burial of bin Laden's remains was done in strict conformance with Islamic precepts and practices. It was prepared in accordance with the Islamic requirements," adviser John Brennan told reporters at a White House briefing. "We early on made provisions for that type of burial and we wanted to make sure that it was going to be done, again, in strictest conformance."

The religious rites were conducted on the deck of the USS Carl Vinson in the Arabian Sea, with the ceremony starting at 1:10 a.m. and finishing at 2:10 a.m. ET, according to a senior Defense official.

"The body was washed and placed in a white sheet. A military official read prepared remarks, which were then translated into Arabic by a native speaker, The body of Osama bin Laden was placed on a flat board, which was then tipped up, and allowed to slide into the sea," the official said.

A senior Defense official said no country was willing or able to take bin Laden's body for a funeral.

Taking the body to another country and trying to arrange a funeral would have violated the Islamic rule requiring a burial within 24 hours, Brennan said.

"There were certain steps that had to be taken because of the nature of the operation," Brennan said. "We wanted to make sure we were able to do that in the time period allotted for it. Going to another country, making those arrangements, requirements, would have exceed that time period, in our view."

The descriptions of the burial appear to indicate U.S. forces did attempt to follow Islamic burial rules, said Juan Campo, a professor of religious studies at the University of California in Santa Barbara who has studied burial rites in the Muslim world.

Questions, however, do remain about the rites, Campo said.

For one, Islamic law requires that a Muslim read a special funeral prayer during the ceremony. A Muslim chaplain or even a rank-and-file sailor who practices Islam could read the prayer, he said. U.S. officials' statements do not indicate whether the native Arabic speaker was a Muslim.

Also, an Islamic authority would normally grant authority to bury a body at sea when a land burial is not an option. Campo said he would want to know who, if anyone, gave that authority.

In his briefing, Brennan said U.S. authorities did seek guidance on the burial.

"We consulted the appropriate specialists and experts, and there was unanimity that this would be the best way to handle that," he said.

That the U.S. forces performed a ritual aboard ship instead of dumping bin Laden's body from an airborne helicopter would mute some criticism of the burial from radical Muslims, Campo said.

"That may temper a lot of that," he said.

Another concern expressed by U.S. officials was that bin Laden's grave site would become a shrine -- a practice Campo said bin Laden detested but nevertheless likely would have occurred.

"He was given a proper burial. It removes this -- any thought that there'll be any shrine to Osama bin Laden or grave robbing or any other lasting impact for this death," Rogers said.

Maher Hathout, senior adviser of the Muslim Public Affairs Council in Los Angeles, said that while the decision was not consistent with Muslim tradition because his death "did not occur in the ocean," the method was pragmatic.

"I don't think it was meant to humiliate, it was meant as an easy way out so we don't have a tomb because there are some people who will sentimentally attach to him, and we should not apologize for that decision," Hathout said.

CNN's Stan Wilson in Los Angeles contributed to this report.