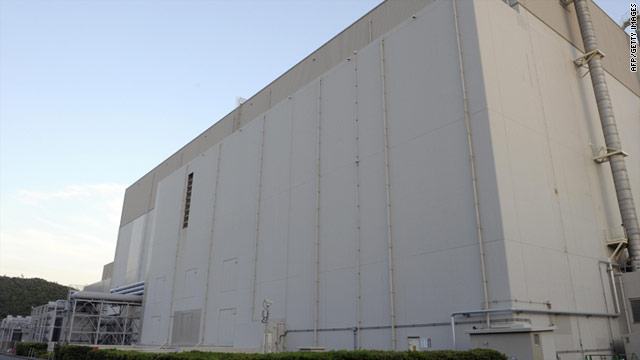 View of the Hamaoka nuclear power plant's No.3 reactor taken in May, 2009.
STORY HIGHLIGHTS

Tokyo (CNN) -- Japan's prime minister said Friday he has asked the operator to shut down the nuclear reactors at the Hamaoka nuclear plant until earthquake and tsunami protections can be built.

The plant -- located on the Pacific coast in Omaezaki, southwest of Tokyo -- is vulnerable and could produce "grave damage to Japan" similar to the problems at the Fukushima Daiichi nuclear power plant that was damaged in the magnitude-9.0 earthquake and subsequent tsunami in March, Prime Minister Naoto Kan said.

"The primary reason for this request is in the interest of the safety and security of the people of Japan," Kan said. "We came to this conclusion because of the grave impact on Japan's people that could be incurred as a result of a serious accident at Hamaoka Nuclear Power Plant."

The prime minister stressed that he could only ask the plant's owner, Chubu Electric Company, to shut down the plant. The Japanese government can not order the company to close the plant, he said.

A representative for the company said it had no immediate comment.

"Greenpeace welcomes Prime Minister Kan's request to close Hamaoka, one of the most dangerous nuclear reactors in Japan," said Junichi Sato, Greenpeace Japan Executive Director. "This is the first time a prime minister has directly requested a nuclear plant in Japan be closed, however, it cannot be the last."

Nuclear plant safety has been in the spotlight worldwide since the March 11 earthquake and ensuing tsunami that forced the automatic shutdown of reactors at four Japanese power plants, including Fukushima Daiichi.

The loss of cooling at that plant caused a series of problems, including explosions that damaged the buildings housing nuclear reactors and caused the release of radioactive particles into the atmosphere. Radiation eventually spread into the ocean after plant workers began releasing contaminated water into the sea near the plant.

The disaster ranked at the top of the seven-step International Nuclear and Radiological Event Scale, equalling the 1986 Chernobyl reactor explosion. Crews are still working to restore cooling and contain the damage.

The United States was among the nations that ordered a review of nuclear plant safety in the wake of the Fukushima disaster. That review by the U.S. Nuclear Regulatory Commission continues.