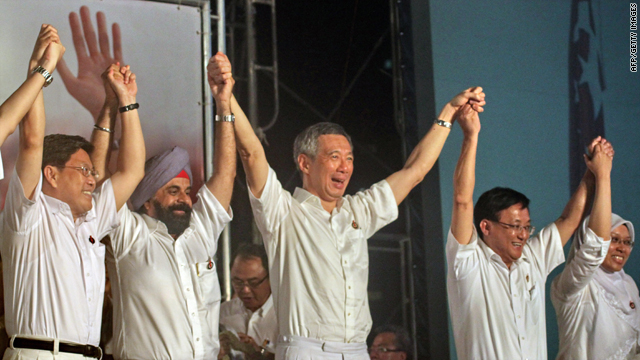 Singapore Prime Minister Lee Hsien Loong, center, of the People's Action Party joins hands with some of his candidates as they celebrate victory in the general election in Singapore early on Sunday.
STORY HIGHLIGHTS
RELATED TOPICS

(CNN) -- Singapore's ruling party was returned to power in general elections Saturday, despite the strongest challenge to date from the opposition.

The People's Action Party, in power since 1959, won 81 seats, while the opposition Workers' Party took six, according to the Elections Department.

Saturday's voting in general elections were to determine 82 seats of the incoming parliament; five seats were already decided as that slate ran unopposed in one district.

The economy took center stage in the election in the Asian city-state. Many voters said they were worried about the relatively high cost of living and the rise of low-wage immigrant workers.

Singapore is a prosperous nation but it remains an authoritarian nation with curbs on freedom of expression, assembly and association. Political activities are tightly controlled by the government, according to human rights monitoring groups.

A record 2.2 million people are eligible to vote, many for the first time, the government-backed Straits Times newspaper reported. In the last parliamentary election in 2006, 1.22 million people voted when 47 out of 84 seats were up for grabs, the newspaper said.

CNN's Claudia Dominguez and Moni Basu contributed to this report.