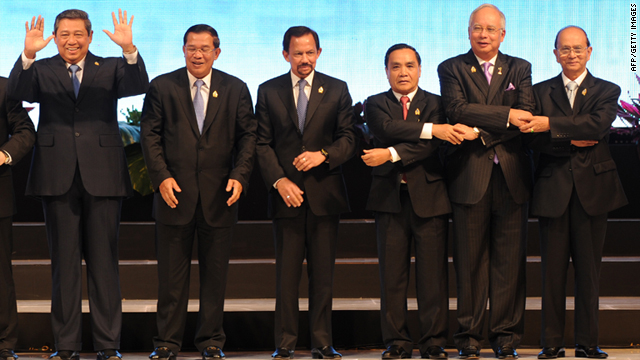 The leaders of the Association of Southeast Asia Nations (ASEAN) stand together for a group photo in Jakarta on Saturday.
STORY HIGHLIGHTS
RELATED TOPICS

Jakarta, Indonesia (CNN) -- Leaders of the Association of Southeast Asian Nations met in Indonesia on Saturday for a two-day summit expected to focus on efforts to achieve economic integration by 2015.

The meeting started under the cloud of security issues such as the Thai-Cambodia border conflict.

Indonesia, which chairs the summit this year, has been trying to mediate talks between Thailand and Cambodia in their dispute over the ancient Preah Vihear temple.

Renewed fighting in the area has prompted displacement of thousands on both sides. Fighting along the turbulent border has raged since last month as the two sides accuse each other of trying to seize ancient temples.

Much of the border between the two countries remains in dispute.

"We realize that to ensure peaceful and stable east Asia region, we must ensure stability and security in the region," he said in his opening speech.

"History recalls that as one of the pioneers of regional integration in the world, ASEAN was established based on the strong desire to establish peace, building consensus, promoting stability through regional cooperation and integration."

Last month, both nations agreed to the deployment of an Indonesian observer team to the disputed area, but have not agreed on conditions set by either country. There are no indications so far that the leaders of both nations will meet on the sidelines of the summit.

Other issues expected to be discussed is Myanmar's bid to host the summit in 2016, two years before its turn to assume the chairmanship.

"Rewarding Burma with ASEAN's chairmanship after it staged sham elections and still holds 2,000 political prisoners would be an embarrassment for the region," said Elaine Pearson, deputy Asia director at Human Rights Watch. "ASEAN leaders need to decide if they will let Burma demote ASEAN to the laughingstock of intergovernmental forums."

Myanmar was formerly known as Burma.

The regional group rotates the chairmanship every year among its members: Brunei, Cambodia, Indonesia, Laos, Malaysia, Myanmar, the Philippines, Singapore, Thailand and Vietnam. International pressure forced Myanmar to skip its turn in 2005.

Yudhoyono also stressed the need for ASEAN leaders to address the challenges of food and energy security.

"We must give serious attention and take concrete measures to address the soaring of food prices and world energy, which in turn will negatively affect the prosperity of our people," he said. "History shows that the rise of food and energy prices usually caused the increase in the number of people living in poverty."