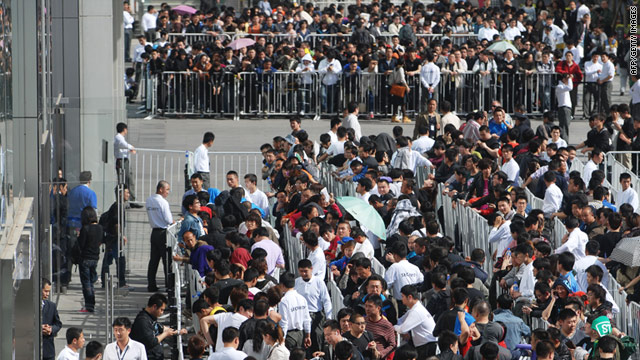 People queue to buy iPad 2 at an Apple store on May 6 in Beijing, China.
STORY HIGHLIGHTS
RELATED TOPICS

The release of the iPad 2 and white iPhone 4 last weekend was no exception. However, sales on Saturday hit a speed bump when foreign Apple employees and Chinese customers were caught in a scuffle outside one of Apple's Beijing stores.

According to witnesses, a Chinese man thought to be a scalper -- a buyer who makes multiple purchases to resell at higher prices -- tried three times to cut into a long line of customers waiting to buy the newly-released white iPhone 4 in Beijing. Three Apple security guards and an Apple manager attempted to escort the individual away from the store. Two of the employees were foreigners.

As the man was taken away, witnesses said a shoving match erupted, involving an Apple employee and a member of the alleged scalpers' family. When the situation escalated, Apple security guards shut and locked the front door of the store.

In protest, a group rushed the entrance and shook the glass door until it shattered. A metal hinge was seen falling from the door, hitting a security guard on the head. Two men and two women suffered minor injuries in the clash, state media reported.

The store, which is located in Beijing's high-end Sanlitun Village shopping and dining center, was closed to the public on Saturday afternoon for repairs. The confrontation was resolved peacefully, according to a police source who spoke with the state-run People's Daily newspaper.

"The Apple store in Sanlitun closed for several hours on Saturday after a group outside the store became unruly. The store team acted to protect themselves and our customers by closing the doors and preventing the group from entering. The safety of our customers and employees is our top priority," Beijing-based Apple spokeswoman Carolyn Wu told CNN.

Local police declined to comment on the situation. By Sunday, Apple resumed normal business hours. Lines for the iPad 2 and white iPhone 4 were visibly shorter than the previous two days.

Apple declined to comment on the scalpers and reselling industry in China.

"Demand on the next generation iPad 2 has been amazing," Wu said. "We are working hard to get the iPad 2 into the hands of every customer who wants one as quickly as possible."

Despite only having four retail stores in China, Apple dominates the tablet market in China, harnessing more than three-quarters of the market, according to analysts. When the first edition of the iPad launched in September, customers in Beijing camped out for more than 65 hours to be among the first to purchase the tablet.

The American electronics-maker has enjoyed rapid growth and overwhelming demand since it opened its first store in China in 2008. Apple now has four stores in China -- two in both Beijing and Shanghai.