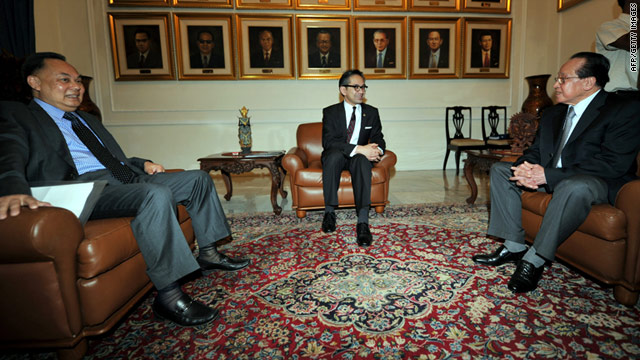 The solution will allow for the resumption of talks between the two countries and the deployment of an Indonesian observer team to the disputed territory if the two governments agree to the deal hammered out between foreign ministers, Natalegawa said.

Fighting along the turbulent border has raged since last month. Clashes around the Preah Vihear temple prompted displacement of thousands on both sides and caused at least 20 deaths.

Thai Foreign Minister Kasit Piromya and Cambodia Foreign Minister Hor Namhong met with Natalegawa for about three hours in Jakarta to iron out details of a plan to help ease tensions and prevent more clashes the disputed territory near the temple.

The package was proposed by Indonesia as chair of ASEAN, the Association of Southeast Asian Nations, during its annual summit on Sunday.

On the sidelines of the just-concluded summit, a breakthrough seemed impossible as Thai Prime Minister Abhisit Vejjajiva and Cambodian Prime Minister Hun Sen refused to back down from their sets of opposing conditions.

But after a meeting with host Indonesian President Susilo Bambang Yudhoyono, both leaders agreed to let their foreign ministers stay another day for further talks.

Thailand had earlier refused to agree to a proposal that would send Indonesian observers to the disputed territory, saying Cambodia must first withdraw its troops from the area. Cambodia has rejected that demand, insisting that a team of Indonesian observers needs to be sent to the region.

The two ministers did not address the media after the Monday meeting but Natalegawa described the meetings as constructive and comprehensive.

Natalegawa later told reporters: "This meeting was very productive and exceeded my expectations. The agreement is at least on the ministers' level."

Both ministers will report Monday's discussions to their respective governments for approval, he said.

The proposed comprehensive solution includes a timeline but will need the final approval before specific actions may be set in motion, he added.