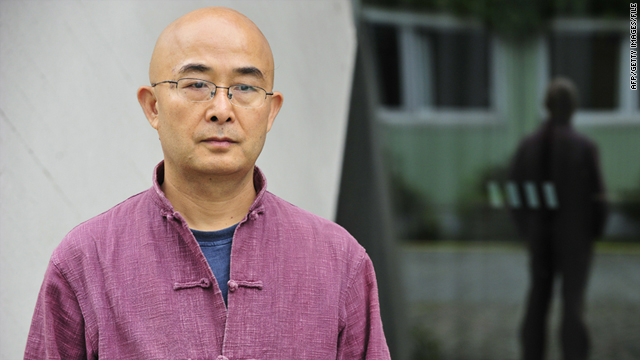 Hong Kong, China (CNN) -- The dissident writer who was to talk about China's powerless and voiceless at the Sydney Writers' Festival in Australia next week won't be there.

"I can only stay at home," Liao Yiwu said early Tuesday by telephone on being denied permission to leave China. "They didn't want me to participate with events having to do with my book."

Liao said that he had been transparent with police throughout the application process, explaining that all the events he had been invited to were cultural. No specific reason was given for the denial, he said. Liao acknowledged that he is considered a controversial writer by Beijing.

The books of the Chengdu-based writer, musician and poet are banned in China for being critical of the government. Liao's "The Corpse Walker" is an anthology of stories as told through the voices of social outcasts in China, among them a practitioner of the banned Falun Gong movement, a leper and the father of a student who died in the Tiananmen Square massacre.

His poem "Massacre," which condemned the government's crackdown in Tiananmen Square, led to a four-year prison sentence.

According to PEN, a literary and human rights organization, as of last month at least 49 Chinese writers are in prison, detained or under house arrest in the worst crackdown on dissent in years.

Among those in prison are writer Liu Xiaobo, who was denied permission to accept his Nobel Peace Prize last year; artist Ai Weiwei; and blogger Ran Yunfei.

What China has denied us here is the ability to understand the country more
--Chip Rolley, artistic director of Sydney Writers' Festival
RELATED TOPICS

"Travel bans like this make it appear as though Chinese authorities are trying to control discussion and debate outside of China as well as inside their own borders," said Larry Siems, director of the Freedom to Write and international programs at the PEN American Center, in an email.

Last month Liao was prevented from attending the PEN World Festival of International Literature in New York. In the past decade Liao has been denied permission to leave China 16 times, he said, but was allowed to attend the literary festival in Berlin, Germany, last year.

"We thought there would be a great opportunity to get him," the Sydney festival's artistic director, Chip Rolley, said by telephone Tuesday.

The Sydney Writers' Festival, which opens Sunday, had scheduled Liao for five events, including the sold-out panel, "The Dangers of What We Think We Know." "He was to talk about his personal history and what China has been through, the sort of myths we create for ourselves and how they get divorced from reality," Rolley said.

In another event, Liao was to perform his poetry with musical accompaniment.

"What China has denied us here is the ability to understand the country more," Rolley added. "China is engaging with the world economically and with that is the expectation we can engage with China culturally. It's a decision that I think does not make sense."

Liao's denial marked the first time a writer had been denied permission to attend the Sydney Writers' Festival, Rolley said, adding that Chinese writers -- including Man Asian Literary Prize winner Su Tong and poet Bei Dao -- had participated in the past.

"All we can express is our profound disappointment and our concern for him," Rolley said. "And we also want to ensure that when the festival gets under way, we will be doing what we can to get his views out there to mark what happened and to honor him."

As a follow-up to "The Corpse Walker," which has been translated into seven languages, Liao's new collection of stories, "God is Red," will be published in August. The 17 stories were written between 2002 and 2010 about Christianity in China, with Liao drawing parallels between the struggle of Chinese Christians and his own fight to write.