Japan's Prime Minister to give up salary 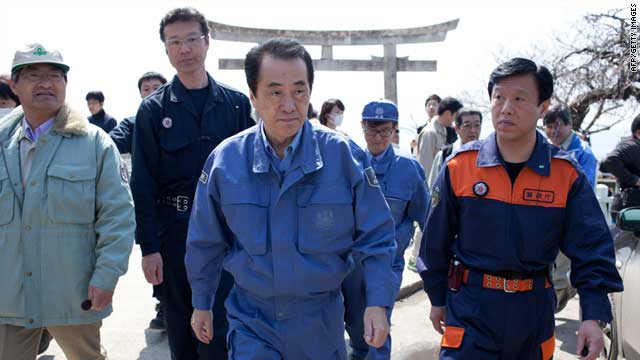 Tokyo (CNN) -- Japan's Prime Minister Naoto Kan said Tuesday that he will give up his salary until the nuclear crisis in the country is over.

He also said he would review the country's energy policy and consider other energy sources like wind and solar power.

The prime minister's announcement comes the same day that about 100 residents, who had been evacuated from an area close to Japan's Fukushima Daiichi nuclear plant, were allowed to return home Tuesday for a short visit to gather belongings. After donning protective suits to guard against radiation,the residents where allowed to go to their homes in the village of Kawauchi, officials said.

They were only allowed one small bag and could stay in their homes for two hours. For some, this was the first time they had been home since April 22 when the Japanese government issued the mandatory evacuation from a 20-kilometer area around the nuclear plant.

"I left my medicine even though I have a chronic illness. I need to get it," a man told Japanese public broadcaster NHK.

Also left behind were pets.

Residents may be able to go back and get their pets in the near future, officials said. After two hours at their homes, residents were taken to a base to undergo examinations for radioactive substances. Cooling systems at Fukushima Daiichi, about 240 kilometers (150 miles) north of Tokyo, were knocked out by the devastating tsunami that struck Japan's Pacific coast after a massive earthquake March 11.

The disaster has led to mandatory evacuations of about 78,000 people living within 20 kilometers (12.5 miles) of the plant. People living another 10 kilometers away -- or at least another 60,000 people -- have been ordered to remain sheltered.