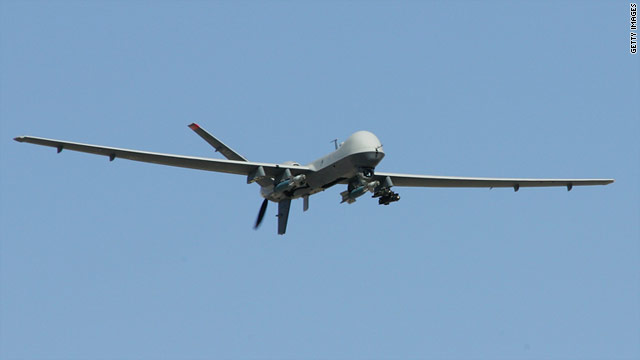 Thursday's suspected drone strike (file photo) was the 23rd this year compared to 111 in all of 2010, according to a CNN tally.
STORY HIGHLIGHTS

The victims were suspected militants, the officials said.

The missiles struck their vehicle as they were traveling in the Datta Khel area of North Waziristan, one of the seven districts of Pakistan's volatile tribal region bordering Afghanistan.

Thursday's suspected drone strike was the 23rd this year compared with 111 in all of 2010, according to a CNN tally.

Pakistan and the war on terror
RELATED TOPICS

The United States does not comment on suspected drone strikes. But it is the only country in the region known to have the ability to launch missiles from drones, which are controlled remotely.