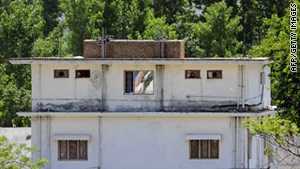 "This is not movie-quality stuff," the source said.

The revelation of the digital video was among a series of developments Friday in the wake of bin Laden's death, including word that U.S. intelligence officers, along with Pakistanis, interviewed three of his widows and found them "hostile."

A source familiar with the material seized from bin Laden's compound said Friday that U.S. Navy SEALs recovered a stash of pornography. The source would not discuss exactly where it was found, what it was or whether it is believed to belong to the al Qaeda leader or to someone else living at the site, such as bin Laden's couriers or his son.

Meanwhile, in Pakistan's northwest, the Taliban took responsibility for twin suicide bombings at a military training facility that killed 80 people, nearly all of them recruits, and said they were avenging bin Laden's killing, officials said. About 140 others were injured.

On a related front, four alleged U.S. drone strikes have pounded Pakistan's tribal region since the al Qaeda leader's death, including one Friday that killed four suspected Islamic militants in the Datta Khel region of North Waziristan, according to two Pakistani intelligence officials. They said an unmanned aircraft fired four missiles at a militant's vehicle.

Bin Laden's compound is also undergoing intense analysis, and U.S. officials say he apparently enjoyed a support network in Pakistan that allowed him to stay in one location for the past several years. He apparently didn't even prepare an escape plan or means to destroy his reams and gigabytes of documents in the event of an enemy assault, according to the U.S. sources.

In addition to the rash of intelligence said to be garnered from the raid, an unreleased audio message from bin Laden was found, a U.S. official said Friday. The message, produced in late April just days before his death, focused on bin Laden's support of the "Arab Spring."

The message refers to the revolutions in Egypt and Tunisia but doesn't mention the uprisings in Libya, Yemen, Syria or elsewhere, said the official, who spoke on condition of anonymity due to the classified nature of the information.

Back in the United States, the Pentagon is looking to "pump up the security" for the team of SEALs who killed bin Laden after the commandos expressed concern for their safety and the safety of their families, Defense Secretary Robert Gates said Thursday.

Adm. Gary Roughead, chief of naval operations, said Friday that he is "absolutely" confident the families of the Navy SEALs involved in the raid can be protected, noting that such an issue is not new to the military.

"We've been very mindful of the effects on those who conduct operations like that, not just our SEALs," Roughead said. "But oftentimes, we will withhold the names of a particular ship, for example, simply because we don't want there to be any retribution against the families. And the world we live in today, people can garner that information very easily, simply by doing a little sleuthing."

Two lawmakers joined a public chorus for the release of photos of bin Laden's body after seeing the images themselves. "These are very graphic, gruesome pictures," said Rep. Doug Lamborn, R-Colorado. But seeing them "gave me a sense of finality and closure."

The SEALs' digital footage of their raid on the bin Laden compound is now being reviewed by the military as part of a standard post-mission analysis, said the U.S. military official.

Among other things, analysts are attempting to find exactly how much of the moment in which bin Laden was killed was recorded.

Describing the footage, the source said that any glimpses of bin Laden caught on camera would be brief. Because the cameras were attached to the SEALs' helmets, the footage is extremely unsteady and constantly shifting.

The source described much of the footage as fast and violent.

The video review will be used to help discern what went right and wrong during the raid. It helps the SEALs "remember what went on in the heat of the moment," the source said.

The review is meant to "look and learn," the source added.