By Liz Gooch for CNN 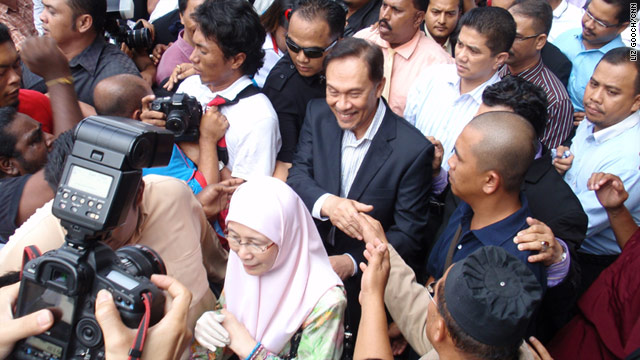 Anwar Ibrahim, center, has repeatedly claimed the trial is an attempt to derail his political career.
STORY HIGHLIGHTS
RELATED TOPICS

(CNN) -- A Malaysian court on Monday ordered opposition leader Anwar Ibrahim to enter his defense to sodomy charges after ruling that there was a case to answer.

Anwar is being tried in the Kuala Lumpur High Court for allegedly sodomizing a former male political aide, Saiful Bukhari Azlan, in June, 2008.

The judge, Zabidin Mohamad Diah, told a packed courtroom that he found Mr. Saiful to be a credible witness.

"His evidence was reliable," he said.

The judge concluded: "I find the prima facie case ... has been made out against the accused. Therefore, the accused is called to enter his defense."

Sodomy is an offence punishable by up to 20 years' prison in Malaysia.

Speaking to reporters outside the courtroom, Anwar said: "It does not come as a surprise the judge gave this ruling but what is clearly shocking is that he virtually prejudged the case ... I think therefore it makes the position of the defense very precarious so in my initial discussions with the legal team we have decided to go all out to defend."

Anwar has repeatedly claimed that the trial is an attempt by the government to end his political career, an assertion the government has consistently denied.

One of Anwar's lawyers, Sankara Nair, said the defense was "dissatisfied" by the judge's ruling.

"We feel that this would have been a case of outright acquittal because in our opinion there was no case to answer," he said.

Outside the court, Anwar was greeted by hundreds of supporters, who chanted "Reformasi" or reformation, and crowded around the politician.

This is the second time Anwar, 63, has been tried for sodomy. In 1998, Anwar, a former deputy prime minister, was convicted of sodomy and jailed for six years before a court overturned his conviction in 2004.

The trial is scheduled to resume on June 6, with Mr. Anwar expected to take the witness stand.