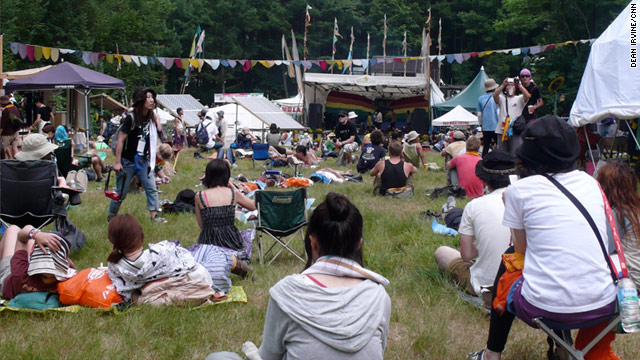 Time to reflect in one of Fuji Rock festival's quiet corners. This year's festival will be the most emotional for its organizers.
STORY HIGHLIGHTS

(CNN) -- This year's Fuji Rock Festival in Japan could be the most difficult for Masahiro Hidaka.

He's the festival's organizer who over 15 years has faced down typhoons and musicians' monstrous egos to successfully host the annual three day music festival in the picturesque mountains of western Japan.

But with the aftermath of the March earthquake and tsunami still unfolding in the northeast of the country, Hidaka is looking for ways to mark the gravity of the situation while allowing the thousands who visit each year to unwind and enjoy themselves.

"I think it will be a very emotional time for my staff and the audience," he says.

Japan tourism hit by disaster
It will be a time for release of all the terrible times and tension that has been winding up inside.
--Masahiro Hidaka, Fuji Rock festival organizer
RELATED TOPICS

"We watched, like everyone else, the whole thing on TV. It is very hard to put into words my feeling as I have many friends in the disaster region and it's my country. Nobody deserves such horror."

"Jishuku" (self-restraint) has been added to the collective somber mood across the county and like many businesses in Japan, public events and festivals have suffered as a result.

Hundreds of local cultural events and festivities have been cancelled or postponed indefinitely in the few months following the disaster. The Kabuto Metal Festival and Punkspring music festival were called off and it was reported that Japan's biggest classical music concert, La Folle Jouree au Japon, saw a large number of its musicians pull out.

While some have been cancelled out of respect for the suffering of those in the disaster-hit area, some have been affected by the apprehension of some to visit Japan in troubled times; tourism to Japan has been hit hard, with a drop of 50% in visitor numbers in March 2011 compared with 12 months earlier.

Johnny "Fingers" Moylett, Hidaka's co-producer of Fuji Rock, says that none of the bands has pulled out of their event scheduled for the end of July because of fears surrounding the nuclear crisis at the Fukushima Daiichi power plant.

However he admitted that ticket sales over the past couple of months had been much slower than in previous years.

Hidaka says he had to reassure many international bands that it would be safe for them to play at the festival, yet many of them responded really positively to the crisis with some joining the "Benefit for Nippon" charity concert that took place in London last month.

In many ways Hidaka believes the festival will be more vital than ever this year.

"(It will be) the first major gathering and a time for release of all the terrible times and tension that has been winding up inside."