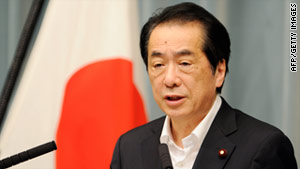 The Japanese Cabinet on Friday approved a plan that would bring the country's laws in line with the Hague convention on international child abduction, according to Prime Minister Naoto Kan's office.

The plan basically requires an overhaul of Japan's family law system. It would put the Foreign Ministry in charge of the cases related to international child abduction, including finding abducted children, taking measures to prevent child abuse and advising parents on the voluntary return of children, according to a statement from Chief Cabinet Secretary Yukio Edano.

The legislation would take into account child abuse, spousal abuse and a parent who faces criminal charges in his or her home country, the statement said.

The plan approved by the Cabinet will be considered by Japan's legislature, where it is expected to face some resistance.

Even if it is approved, it could take years before Japan is ready to sign the Hague convention, which calls for the signatories to abide by the court rulings of each member country.

Japan has been under intense international pressure to change how it deals with international child custody arrangements, particularly since the case of Christopher Savoie in 2009.

Savoie, an American, triggered international news headlines after his arrest on child abduction charges in Japan. His two children had been taken to Japan by his ex-wife, despite a U.S. court order requiring Noriko Savoie to remain in the United States.

Savoie traveled to Japan, where he has citizenship, and reclaimed the children, then headed for the nearest U.S. consulate, where he was arrested at the front gate. The charges were later dropped when Savoie agreed to return to the U.S. without his children.

Because Japan is not a party to the Hague convention on international child abduction, Tokyo did not recognize the U.S. court's ruling nor the subsequent arrest warrant for Noriko Savoie.

Savoie's case shone a light on hundreds of other similar situations in which Japanese ex-spouses have taken their children to Japan despite custody arrangements in the United States.

Japan's current system does not recognize shared custody, even among the country's own citizens who reside in Japan.

Morley, who has represented more than 100 parents, most of them fathers, called Friday's decision "a baby step in the right direction" for Japan. But he says that even if the country signs the Hague convention, it will have no effect on Savoie or any of his other clients.

"It will certainly not help those people who have thus far lost children to Japan, because it will only take effect when it's put into force," Morley said. "It's definitely not going to be retroactive."

However, if Japan truly overhauls its family law system -- instead of making "purely cosmetic" changes to please international critics -- that could bode well for his clients.

"If they completely restructure their system so they can enforce court orders and ... have an environment where both parents have a right to participate in the life of their children after separating, that's going to take a long time," Morley said. "If they go through another charade, and the changes are purely cosmetic, that can happen much faster.

The U.S. State Department acknowledges that "abductions to Japan represent one of the largest portfolios in the Office of Children's Issues and are among the most difficult to resolve."

Since 1994, there have been 321 children abducted to or wrongfully retained in Japan, it said. None of those cases has been resolved.

Morley credits Secretary of State Hillary Clinton with helping put pressure on Japan to change its system. However, he says there is tremendous opposition within Japan to the Hague convention.

"There's a prevailing view that the Japanese mothers, who are the ones primarily removing children, are running back home to the safety of Japan because their American husbands are wife beaters," he said.

He says he thinks Japan could address this concern by "watering down" any changes it makes to its family law system ahead of signing the Hague convention.

Morley and Savoie have denied any physical abuse, and there have not been any charges. This month, a Tennessee court ordered Noriko Savoie to pay her ex-husband $1,000 each day she continues to "falsely imprison" the two children.

The primary concern of Japan's government in deciding this matter will be "to ensure the welfare of children," Foreign Ministry spokesman Hidenobu Sobashima said Thursday.

"Of course parental rights are important, too, and we should take into account the father's views and the mother's views," Sobashima said.

Until then, Morley says, his clients -- even those lucky enough to see their children for an hour or two in a Japanese courtroom once a month -- will continue to be cut off as parents to their children.