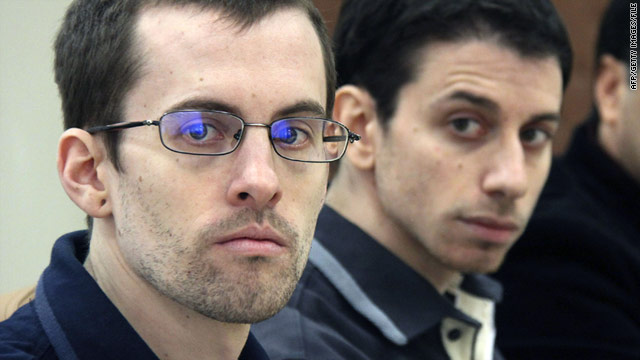 American hikers, Shane Bauer, left, and Josh Fattal have been detained in Iran since 2009.
STORY HIGHLIGHTS

(CNN) -- The captors of Shane Bauer and Josh Fattal, two Americans currently being held in Iran on suspicion of espionage, allowed them to telephone home over the weekend, according a statement released Monday by members of their families.

The Sunday calls, the third received by the families in more than 21 months, lasted less than five minutes, according to the statement.

Bauer, Fattal and Bauer's fiancee, Sarah Shourd, were arrested July 31, 2009, while hiking along an unmarked border between Iran and Iraqi Kurdistan.

U.S. officials have repeatedly said the charges against Bauer and Fattal are meritless and have called on the Iranian government to release the two men.

A trial for the men was supposed to take place earlier this month, but it was delayed without an explanation after Bauer and Fattal were not brought to the courthouse.

The statement from the Bauer and Fattal families said the men sounded "reasonably well."

However, the detainees told family members they had been on a 17-day hunger strike to protest their captors' refusal to give them letters sent from home, according to the statement.

Last week, Cindy Hickey and Laura Fattal, the respective mothers of Bauer and Josh Fattal, announced they were going on a hunger strike to protest their sons' treatment.

In the Monday statement, both women said they would continue their "open-ended, rolling hunger strike" until their sons are released.

"Their inhumane treatment has to end with their immediate release," the family statement read. "The people responsible for their unjustified imprisonment are bringing shame on Iran by continuing to hold Shane and Josh without due process and for no legitimate reason"