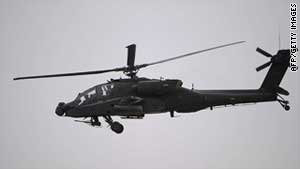 Crew members were not hurt, and the crash site has been secured, the International Security Assistance Force said.

The force did not offer details on the exact location of the crash site, and said the cause of the crash was not immediately known.

On April 23, a coalition helicopter crew member died and another was injured in a helicopter crash in eastern Afghanistan.