NATO on alert for influx of foreign fighters in southern Afghanistan 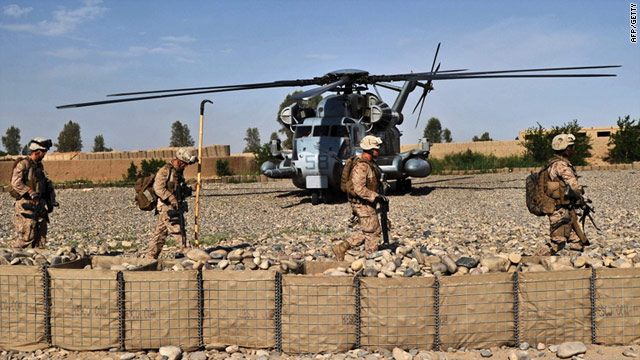 (CNN) -- Coalition forces in Afghanistan say that a recent security operation in the southeast part of the country suggests an influx of foreign fighters may be underway, just as the Taliban begins its "fighting season" against NATO troops.

And intelligence analysts say it seems a growing number of Europeans are among them.

On the night of May 8, a joint NATO-Afghan force encountered a group of militants in a place called Qalat, a district in Zabul province in southeastern Afghanistan. Ten militants were killed, according to a statement Tuesday from the International Security Assistance Force (ISAF).

The combined force "found passports and identification cards from France, Pakistan, and Saudi Arabia amongst ten insurgents killed during the operation," the statement said.

The NATO-Afghan force also detained an al Qaeda fighter of Moroccan origin who lived in Germany -- and who provided details about other foreign fighters. The detainee said he had "observed foreigners from many countries converging in Pakistan to conduct attacks against coalition forces in Afghanistan," according to ISAF.

ISAF says the captured man had provided "information on the mechanics of getting foreign fighters to Afghanistan." He said he had come through Iran -- a route frequently used by al Qaeda and other jihadist groups - where he had been approached to become a suicide bomber.

The Moroccan was not identified, but news of his presence among militants will heighten worries in Germany about the number of its residents setting off to wage jihad. German authorities believe at least 220 German residents received training in Pakistan in the years after 9/11; around 40 are still suspected of being in the tribal areas of Pakistan. Others have returned to Germany and are under surveillance, according to German counterterrorism officials.

Many jihadists from Germany have joined an al Qaeda affiliate called the Islamic Movement of Uzbekistan. The IMU has been active in Zabul, the province where the German-Moroccan was recently captured.

Among them were two brothers of Moroccan origin living in Bonn, who left Germany several years ago.

"We benefited a lot from (Awlaki) and spent priceless hours with him," he wrote. The Chouka brothers apparently spent about a year in Yemen before moving on to the Afghanistan-Pakistan border region.

According to German intelligence officials, it was through the Chouka brothers that another group of would-be German jihadists made the contacts for their journey to join up with the Islamic Movement of Uzbekistan.

They left Hamburg in March 2009 and several members of the group subsequently became implicated in plans by al Qaeda to launch attacks against European cities last year, according to German intelligence officials. Those plans triggered a U.S. State Department travel advisory for Europe last October.

The Hamburg group was given training by the IMU in North Waziristan. A flavor of the training they received can be seen in an IMU video released in October 2009 that featured one of them appealing on camera for new recruits, and showed several German militants firing guns and rockets in what appeared to be live fire exercises in the mountains along the Afghan-Pakistan border.

French authorities say they have concrete indications that 20-30 French nationals may now be tied to Jihadist groups in the Afghanistan-Pakistan border region. However, one French intelligence estimate put the potential number as high as 200-250.

European governments are less worried about foreign jihadists fighting in Afghanistan, where their impact on the insurgency has been marginal, than they are about residents and citizens returning home -- trained and indoctrinated to carry out a terrorist attack on European soil.