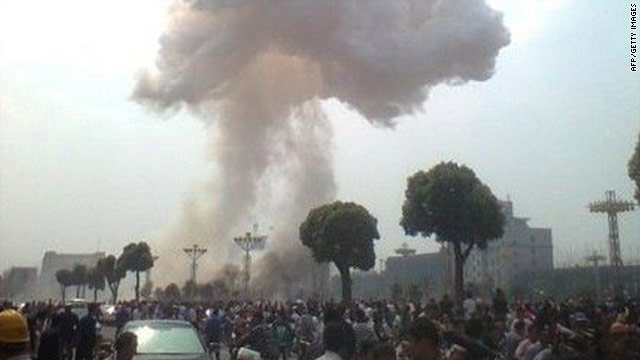 At least six people were injured in the blasts, which occured within a half hour of each other, local officials told CNN.

"A car bomb went off at 9:18 a.m. in the parking lot of the Fuzhou city prosecutor's office, followed by a blast at 9:20 a.m. at the Linchuan district government building and another car bomb at 9:45 a.m. near the local drug administration building," said Zhang Baoyun, a spokesman for the government of Jiangxi province, where Fuzhou is located.

One body was found in the district government building and another person died in the hospital, Zhang added.

Xinhua, citing police sources, reported that one of the people who died in the blast was the man suspected of setting off the explosives. The man was identified as Qian Mingqi, 52, an unemployed resident of the area.

Earlier, Xinhua said a disgruntled local peasant farmer had set off the bombs because of an ongoing lawsuit.

On the Weibo page allegedly belonging to Qian, the bio line reads: "I am physically and mentally normal, and have no criminal record or history of illegal petitions. When my new house was illegally torn down, it caused me huge financial loss. After a futile ten years of appealing for justice, I am forced to take a path I don't want to."

Weibo, the country's most popular microblogging service, is the Chinese equivalent of Twitter.

Photos from the scene show large crowds gathering near one of the blast sites with a thick plume of black smoke in the air.

State-run Xinhua news agency quoted eyewitnesses as saying glass windows were shattered at the eight-story prosecutor's office building, while ambulances rushed in and out of the district government compound.

Authorities are still investigating the explosions, while the injured -- including three in serious condition -- are at local hospitals, Zhang said.

Fuzhou is a city of nearly 4 million residents some 1,600 kilometers (975 miles) south of Beijing.

Last September, clashes between residents and officials in Yihuang, a county in Fuzhou, gained national attention.

Three residents doused themselves with gasoline and burned themselves to protest the forced demolition of their homes by the local government.

CNN's Helena Hong and Shao Tian contributed to this report.