Kim's secretive visit to China a vital one 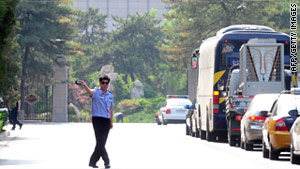 A policeman stops media from filming the Diaoyutai State Guesthouse for visiting dignitaries in Beijing Wednesday.

When he does, it frequently takes him to China, North Korea's closest ally and largest trading partner and main provider of food, fuel and military aid.

The reclusive leader has just concluded a weeklong unofficial visit to China. As usual it was shrouded in secrecy.

On Wednesday, his motorcade was seen in Beijing leaving a guesthouse and heading to the Great Hall of the People, presumably to meet with Chinese President Hu Jintao and other top leaders.

Although hit-and-miss, his stealth movements were tracked by professional journalists and Chinese netizens who tweeted their sightings in cyberspace.

One point that Kim's visit highlights is that the regime in Pyongyang is stable enough for him to be able to travel
--Mike Chinoy, senior fellow at USC U.S.-China Institute
RELATED TOPICS

What brought Kim here for the third time in one year?

"The frequency is linked to the political succession in Pyongyang and the fact that North Korea requires China's ongoing political and economic support," says Stephanie Kleine-Ahlbrandt, director of the International Crisis Group's North East Asia Project.

More than 6 million of the North's 24 million-population urgently need food aid because of a shortfall in domestic production, food imports and international aid, the United Nations reported last month.

Kim may have other wishes. "He wants Beijing's ongoing support of the political succession that he as put into place, and which Beijing has already endorsed," says ICG's Kleine-Ahlbrandt.

Kim, 69, is believed to have suffered a stroke in 2008 and remains in fragile health. Now he has lined up his youngest son, Kim Jong Un, as his successor. Last September, Jong Un, not quite 30 yet, was appointed to the second highest military post within North Korea's ruling party.

If the dynastic handover succeeds, Jong Un will inherit a big role -- and big challenges.

His father presides over a failing Stalinist state that largely survives by closing itself off to outside influence.

Inside North Korea, it's all about Kim Jong Il, portrayed by a propaganda machine as an omnipotent leader.

During my three visits to North Korea, I saw his omnipresent personality cult wherever we went.

Tour guides and local officials invariably regaled our group with stories of how Kim gave "on-the-spot guidance" on just about everything: how to build the nation, fly planes, grow flowers, write operas and make movies.

While playing a round of golf at the Pyongyang Golf Club in 1999, one caddy told me quite solemnly that Kim was such a naturally gifted sportsman that he shot 11 holes-in-one during his first try at golf!

Personality cult aside, analysts say Kim is an adroit politician who managed to wield total power, develop nuclear weapons and leverage them as bargaining chips for the regime's survival.

"One point that Kim's visit highlights is that the regime in Pyongyang is stable enough for him to be able to travel," says Mike Chinoy, a senior fellow at the U.S.-China Institute at the University of Southern California and the author of "Meltdown: The Inside Story of the North Korean Nuclear Crisis." "All signs suggest the succession to Kim Jong Un is proceeding, and that the notion of a looming North Korean collapse remains, in my view, wildly exaggerated."

To be sure, Kim desperately needs China's political backing.

South Korea blames the North for the sinking of one of its naval ships in May 2010, killing 46 sailors. It also berates Pyongyang for bombarding a border island in November, killing two South Korean soldiers and two civilians.

These fatal incidents have soured its relations with the South and have worsened its diplomatic isolation.

Pyongyang's predicament gives China's leaders an opening. Kim's visit provides them a chance to coax Pyongyang back to the negotiation table and re-start the six-party talks aimed at dismantling the North's nuclear programs.

The talks involving the two Koreas, China, the United States, Japan and Russia have been stalled since April 2009 when North Korea abruptly walked out, vowing to "never again" take part in such talks.

Over the past month, however, North Korea has signaled willingness to discuss ways to break the political impasse.

Diplomats of the six parties have also been shuttling back and forth, seeking to find a way to restart the talks.

Ironically, analysts say, it's now the government of South Korean President Lee Myung-bak which is the biggest skeptic about resuming the six-party talks. "Even though South Korean public opinion is divided, there is no appetite to reach out to Pyongyang," says Chinoy. "Hence we see Seoul opposing any move to provide food aid and rebuffing the North's so-called charm offensive."

China insists the six-party talks are the only viable way to resolve the conflict.

And if the talks are to be restarted, says ICG's Kleine-Ahlbrandt, it must happen soon. Reason: the US and China are set to undergo elections or leadership changes next year.

"As we approach 2012, neither the U.S. nor China will have much time to spend any political capital on the issue," she says. "So there is a need to instill greater urgency into the process. The nearer we get to 2012, the more intractable these problems will become."